You be the judge.  New York Times reports:


A person strolling through Riverside Park last Wednesday afternoon spotted something jarring on the riverbank and called the police.

There, below a small pier that juts out from the park at 68th Street, lay the bodies of two young women, bound together by duct tape at their waists and ankles. They had not been in the water long, the police said. Clad in similar black leggings and black jackets with fur trim, their bodies bore no obvious signs of trauma. 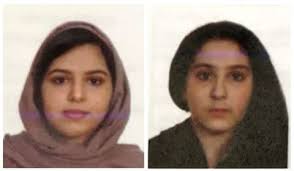 By Friday, detectives had learned the women were sisters from Saudi Arabia who lived in Fairfax, Va.

Rotana Farea was 22; Tala Farea was 16. They had a history of going missing, and they had recently requested asylum in the United States, the police said.

But beyond that, the circumstances of their deaths have remained a mystery. Investigators have struggled to piece together how two young women from a city more than 250 miles away turned up along Manhattan’s Hudson River shoreline.

A medical examination revealed the sisters had water in their lungs which is an indication that they were alive when they went into the water.  New York Police Department told the media that there is "nothing to suggest ...foul play" was involved and that the women likely committed suicide.  One working theory is that they jumped off the George Washington bridge as part of a suicide pact.
Suicide by drowning is rare. The body's instinct for survival usually takes over during the long suffocating process involved in drowning.  Very few people who commit suicide want the additonal suffering involved in drowning to end their lives.
No evidence of foul play?  Hmm, how about they were tied together with duct tape?  Do the crack NYPD investigators believe they tied themselves together at water's edge then jumped into the water? And how exactly did they tie themselves together?  Wouldn't there have to be a third person involved?
Posted by Paul K. Ogden at 2:07 PM