No, I'm not talking about the firing of Secretary of State Rex Tillerson this morning.  That was not unexpected.

Instead, CNBC reports on the unexpected personnel development: 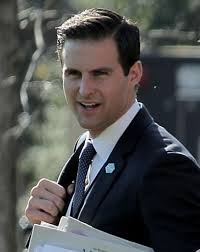 President Donald Trump's personal assistant, John McEntee, was fired Monday for unspecified security reasons and was removed from the White House, according to a Tuesday report from The Wall Street Journal.

"Katrina and John will play pivotal roles on our campaign once again as we develop a winning strategy through 2020 to Keep America Great," said Michael Glassner, the campaign's chief operating officer. "They will also contribute tremendously to our national engagement in the mid-term elections this year. We're delighted to have them back on the team."

McEntee, who served on Trump's winning presidential campaign beginning in 2015, joined the Trump administration after the election. He was escorted off the White House grounds on Monday over an "unspecified security issue," the Journal reported, citing sources.

A CNN reporter later tweeted, citing a source familiar with the matter, that McEntee was terminated because the Department of Homeland Security is investigating him for "serious financial crimes" that are not related to Trump.

I'm trying to remember any crooks, thieves, robbers, leakers, spies, etc. that Obama ever got rid of. I figure he
brought in a lot of Muslims....some of which are still on the payroll....see Andre Carson.

Obama brought Andre Carson into the U.S. House and could have "fired" him? I missed that lesson in civics class.

I think the problem is that Trump lied (I know lies from Trump should be expected) about how he would hire the best people. He clearly has not done that. Of course, why would any sane person want to work for Donald Trump anyway? Everyone who works for Trump ends up with their reputations tarnished.