The Real Problem with the "Shithole" Controversy

Watching the continued news coverage about the President Trump calling Haiti, El Salvador and African countries "shitholes" I find that a lot of commentators are, sometimes conveniently, missing the point of what is so disturbing about the President's vulgar reference.  His labeling of certain countries as "shitholes," by itself, would only be a diplomatic gaffe.  There are certain things a President shouldn't say out loud such as comments denigrating countries with which the United States has to deal.  A President employing common sense, which this President apparently does not have, would not have chosen such a vulgar label in describing those countries.

The real problem though was that his "shithole" comment wasn't really about the countries so labeled, but rather about the people who live in those countries.  President Trump was saying that the value of people is defined by the country from which they originate.  If people are from a "shithole", then they are less worthy of becoming American. 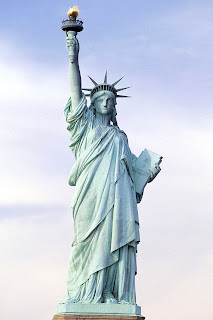 Such an ignorant comment by the President ignores the American history of immigration and the American experience.  Pretty much everyone who lives in this country had ancestors who came from "shitholes."  That fact did not define who our ancestors were.  Rather, it is because of the hunger for a better life that immigrants fled their "shithole" lives in their shithole countries to come to America.  Armed with ambition and the dream of a better life, most became great citizens who contributed so much to this country.    Trump's comment is a yet another assault on American values, in particular, the ideal emblazoned on the Statute of Liberty:

"Give me your tired, your poor, your huddled masses yearning to breathe free, the wretched refuse of your teeming shore. Send these, the homeless, tempest-tossed to me, I lift my lamp beside the golden door."

And, no, I don't for a second believe the President's late assertion that he never made the "shithole" statement.  First, given the President's penchant for constantly lying, he starts with zero credibility when compared to that of Senator Durbin and Graham.  Then you have the fact is the White House went 12 hours before there was a denial that the statement was made.  During that 12 hour stretch, President Trump gleefully was contacting conservative friends thinking the statement would play really well with the base.

It was only when there was major criticism from pretty much everyone that the President reversed course and denied making  the statement.  That's when Senators Cotton and Perdue chimed in with their "can't recall" statements.  When the blowback didn't dissipate and, in fact, intensified, Senators Cotton and Perdue's memory suddenly evolved, so that they were now able to recall that the President didn't say "shithole."  Several others in the room, including Republicans, did not back up the President's denial, except for Department of Homeland Security Secretary Kirstjen Nelson who during a congressional hearing yesterday claimed she only heard the President use "tough language."  Please.  Cotton, Perdue and Nelson should be ashamed of themselves.  It is so disgusting how so many in my party are willing to throw away their reputations and integrity to lie for a President who has no loyalty but to himself.

You and the uniparty are the reason we have Donald Trump for president. The Democrats and Republicans are the same old arrogant uniparty that have preserved nothing, haven't a clue about ethics, spend a lifetime at the taxpayer trough and pretend that all cultures are equal. The old uniparty is dying, it has no future because it is a product of the power hungry, money hungry elites. Your Clinton, Bush, Obama dynasty is going away and you actually shed tears over that. The rest of us celebrate. You should have seen that coming with Richard Lugar getting the heave ho but no you were blind and more than happy to stab the winner in the back. That is what statist do...they can't stand change and we are way beyond being satisfied that Lugar is gone.

Do you realize realize that I'm the one who went to the City-County Building and got Richard Lugar's voting registration records and then went to the Assessors and Recorder's Office and found out he was voting from a house he had sold 30 years earlier? I was the first to break that story on my blog, before any of the mainstream media or other outlets picked it up. I certainly did not support Lugar. He was out of touch with Hoosiers and did not even have a residence in the state. He lived in hotels when he came back to Indiana. He refused to support Indiana Republican candidates or even come back to GOP Lincoln Day dinners or to raise money for candidates. I supported Mourdock.

As far as you being about "ethics," if that's a concern of yours why in the world would you support Donald Trump? Have we ever had a President less ethical, less honest, and more concerned about himself over the best interests of the people, than Donald Trump? I can't think of one.

It wasn't Richard Lugars residence that was the problem, it was Richard Lugars political record that was the problem. State newspapers and television were always proud to say he was Ted Kennedy's favorite republican. And ethics that you mention...why did Indiana republicans in the legislature fail to bring impeachment articles against the Indiana Supreme Court. Politics are local and when politicians fail locally the voter will vote for a Trump just to go around a political barricade. Indiana politicians have gone along to get along for too many elections....now Trump, and the political establishment complains. You want another go along politician then look at Todd Young. He is rated the same as Donnelly on immigration by numbers USA and that rating is an F-. What were the two big items Trump was elected on...immigration and ridding us of Obamacare and we have Indiana politicians of both parties voting the same. That's called the uniparty and Donald Trump is the only known candidate that set himself apart from the uniparty. Why should I support a Romney, Bush, McCain, Graham or any other boomer candidate that supports all the same programs that a Clinton, Obama, Pelosi, Hoyer tag team supports. Trump is the first choice we've had since Reagan and I am taking that choice whether the establishment likes it or not.

It looks like the President has his own shithole issues now: http://thehill.com/homenews/administration/369277-hundreds-of-yelp-reviews-describe-trump-hotel-as-s-hole?amp&__twitter_impression=true

I am sorry, but the fact that an Indiana U.S. Senator is for 30 years voting using a residence where he has absolutely no residency (which can constitute multiple felonies) is a problem. Charlie White has to live with a felony the rest of his life far an accusation that a miniscule fraction of what Lugar and Bayh could have been charged with.

I have never been a Lugar supporter. I didn't like his position on numerous issues, but immigration was not one of them. The Tea Party's position on immigration and opposing free trade is unrealistic and extremely harmful. But what is more harmful is the Tea Party's cultish support of Trump. Trump could do a 180 on numerous issue, and they would continue to follow the two-bit con man off a cliff. They are what is called a "mark." They will wake up, just not sure when.

The comparison between Reagan and Trump...please. Trump isn't 1% the leader Reagan was. Trump is easily the worst President in my lifetime, and I'm counting the Democrats. Donald Trump has no political ideology contrary to what you suggest. He is an empty vessel who came to the Presidency with his only motivation being doing what is in the best interest of Donald Trump. He doesn't care squat about this country. The damage he is doing to American values and my Republican Party, and Reagan's conservative movement, will take us 20 years to recover from. At least. But I don't blame Trump so much as I blame the enablers who made him possible. They are the ones who said honesty, integrity, competence, good temperament, etc. are not qualities we should demand from our President.

If people are from a "shithole", then they are less worthy of becoming Americans.

Worthiness is something that you have constructed, it is more a question about immigration policy. The actual immigration question (assuming that there are limits on the number of immigrants ) is how should immigrants be selected?

And by the way, in 2013, Sen Graham described countries on the US southern border as being hellholes.

Current immigration policy provides exceptions for certain countries, increasing the number for humanitarian reasons and disallowing immigration from other countries.

If immigration to the US is limited, how should immigrants be selected?
by merit? (perhaps some sort of point system based on education, profession, age, family in the US, etc)?

based on the country?

--
"People coming across the southern border live in hellholes. They don't like that. They want to come here. Our problem is that we can't have everyone who lives in a hellhole coming to America. We are just going to have to create order out of chaos. So you have to do something in the southern border that you do not do in the northern border, but if you don't agree that the difference is jobs, then we just do not agree. There are eleven million people coming through the southern border cause they come from countries where they can't find work and life is miserable. So it seems to me that if you can control who gets a job, you have gone a long way toward controlling illegal immigration. Because as long as the jobs are available in America, you can't build a fence high enough to stop people. But if you could make it hard to find a job as well as hard to get across the border, I think you have gone a long way toward fixing this problem.

As I pointed out the problem is not that the President called certain countries "shitholes." Indeed many of those countries are shitholes. (Though for a President to say that out loud isn't smart as it makes dealing with them as the country's chief executive much more difficult). The problem is that Trump said that people are less worthy of coming to the United States because of the country of their origin. Pretty much EVERYONE who has ever immigrated to the United States came because their life in their home country was miserable and they couldn't find work or they were having trouble feeding their families. (One quick example is the Irish who came here because of the potato famine. People were literally starving in that country.) That doesn't make them less worthy. I want people in this country who are hungry, ambitious and trying to get ahead in life. People who are trying to build a better life for themselves and their children. They make the best citizens. What Sen. Graham is not at all inconsistent with his problem with Trump's comment - that Trump was denigrating people based on the country of their origin and Trump's comment was more than a little racist. Nonethless, what Trump said simply isn't true. If you look at immigration from Africa v. Europe, the Africans come to this country with more education than the average American or European immigrant.

You nailed this one.

https://legalinsurrection.com/2018/01/loretta-lynch-bill-clinton-tarmac-meeting-now-makes-sense-it-was-the-end-not-the-beginning/ The County deserves much better than a corrupt Obama and a corrupt FBI and a corrupt DOJ and a corrupt IRS. Fixing that is in process but being obstructed by the usual lightweight crooks.