Earlier this year, the Institute for Justice filed a legal challenge to the constitutionality of Indiana's civil forfeiture law.  That lawsuit, filed in federal court, has survived a motion to dismiss and is proceeding. has a story on the filing of a second civil forfeiture lawsuit: 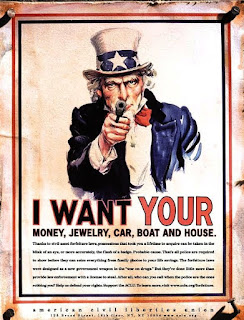 
Criminal defense attorney Jeff Cardella wears his beliefs on his sleeve, in the form of a pair of large, pastel yellow "Don't Tread On Me" cuff links.
In between explanations of his libertarian principles, the 34-year-old Cardella  said his clients may not always be the most sympathetic individuals, but they deserve their rights, too.
Cardella filed a federal class-action lawsuit this month, on behalf of Leroy Washington, whose vehicle was taken by police in September. Washington was arrested and charged with resisting law enforcement, dealing in marijuana and obstruction of justice.
The suit argues that the Indiana law that allows police to seize property from alleged drug dealers and others, regardless of their guilt or innocence, violates criminal defendants' constitutional right to due process.
It "allows the executive branch to seize and hold the vehicle of an owner for several months without affording the owner the right to a postseizure preforfeiture hearing to challenge the seizure," according to the complaint.
It's an argument that could, if it prevails in court, have a sweeping effect on law enforcement.
...
The suit, limited specifically to vehicles in IMPD possession, does not seek monetary damages. Rather, Washington wants law enforcement to give back his vehicle, and the vehicles of countless individuals whose property was seized under Indiana's civil forfeiture laws.
Cardella also seeks a reduction in the period of time law enforcement can hold property without stating a reason for seizing it.
"It's a matter of protecting the constitutional rights of my clients," said Cardella, a professor at Indiana University's Robert H. McKinney School of Law, who is vehemently opposed to "unjust government taking."
Marion County Prosecutor Terry Curry, Mayor Joe Hogsett and IMPD Police Chief Troy Riggs are named defendants in the complaint.
Curry told IndyStar that there are a variety of reasons why the law, as it exists today, is reasonable and constitutional.
"There are protections built in the law to protect innocent people," Curry said. "An aggrieved party could ask for an emergency hearing to get their property back."
The news reporting suggests that the Cardella lawsuit is more about a challenge to the lack of due process, which is certainly a strong claim.  But ultimately the legal attack on civil forfeiture may knock out any Indiana civil forfeiture law whatsoever.   The state constitution mandates that proceeds from "all forfeitures" go to the Common School Fund which provides low cost loans to public schools.  It is not clear that any forfeiture law, that diverts money away from that fund and to law enforcement, would be permitted under Indiana's Constitution.  Unfortunately, issues related to standing have made challenging the laws on those grounds problematic.

Marion County Prosecutor Terry Curry is quoted in the article.  Curry, a Democrat, has greatly expanded the use of civil forfeiture under his tenure.  You no longer have to be charged with a crime in Indianapolis to have your property seized and be subject to a Curry civil forfeiture lawsuit.  At least with his predecessor, Carl Brizzi, civil forfeiture was mostly limited to drug offenses and people who were being charged with a crime.  You would think liberty-minded local Democrats would be outraged by the trampling of civil liberties in the county.  Their silence on the matter is deafening.

I have written numerous times on this matter.  Here are some of those articles:

I have written them before anent their seeking (and paying for) your advice in this long running cancer. I wrote them again today suggesting that I would help fund their lawsuit.

I wonder if it would be legal to withdraw $100,000 in cash from one of my savings accounts and try to set up local police/prosecutors to initiate a forfeiture during a traffic infraction stop? As long as I could get my money back, I'd be willing to get a case going to get civil forfeiture without a criminal conviction ruled unconstitutional since the Indiana General Assembly isn't going to repeal the existing law.