Will Pence Leave the Trump Ticket?

In the aftermath of the Access Hollywood video in which Donald Trump talks about his regularly sexually assaulting women in pursuit of sex, and his attempt, newly married, to commit adultery speculation abounds whether Trump will step down as the Presidential nominee.  In a Wall Street Journal interview, Trump responded that there was "zero chance" he would leave the ticket.

Probably a better question though is whether the Republican Vice Presidential Candidate, Mike Pence 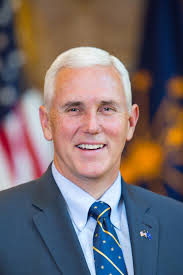 will remain on the ticket.  Pence, a devout Christian, has been placed in many difficult situations defending Trump during the campaign.  He, by virtually all accounts, has done extremely well presenting the traditional conservative Republican message while at the same time not straying too far from the Trump message of change.  But now, with the Access Hollywood video, Pence is being asked to defend the indefensible.  The Hill reports:


Mike Pence and his wife were reportedly floored on Friday when they heard about the lewd remarks about women Donald Trump made in 2005 in a leaked recording.

Trump’s running mate said he was “beside himself” and his wife Karen was "furious" when he found out about audio tape, a source told the Associated Press.

More videos showing Trump to be the reprehensible human being he is are coming.  Things are not going to get better.

If Pence stays on the ticket, he risks being tarnished with those videos.  If he exits now, he will be a front-runner candidate in 2020.   He will be seen as a man who stood up for principle.

Alas, I am not the only one engaging in the Pence speculation.  But I am one of the first.
Posted by Paul K. Ogden at 4:10 PM

I agree Trump is lewd. However, why is MSM burying the Hillary Goldman Sachs speech story? I watched 21 minutes of CBS This Morning. 11 on Trump, 10 on Matthew, 1 on Cubs, Zero on Hillary leaked speeches.

Paul would you have advised Pence against taking the VP slot? Why or why not?

Give me a break.. if so many women are not offended, how could he be..I do not believe Pence is a saint... but I do believe God put Trump where he is to bring us back to him and to make America great again

I am not sure what being besides ones self might mean. My guess is that it is just for public consumption. Mike spent a lot of time in DC and he has likely heard far worse and even from Republicans if truth be known. As for Democrats, they are not pushing this story....not likely they would want their transgressions brought to light(and they have many such). If for instance, Hill's being objectively disordered were looked at closely it would not be pretty.

"From August 2001 through September 2009, Donald Trump was a registered Democrat, prone to the same licentiousness as the likes of William Jefferson Clinton. So why do his past "vulgar" comments from that period surprise anyone?

Donald Trump has been pilloried and abandoned over the last 48 hours by the resurrected Never-Trumps -- mostly Christians who evidently hold no belief in redemption.

Candidate Trump should ignore those seated in the front pews, thanking God they are not like other men."