I am presently reading a book called "The Silencing" by Fox News contributor Kirsten Parker.  A self-professed liberal Democrat who worked for President Bill Clinton, Parker writes about how liberals have taken to employing various methods to silence the speech of conservatives.

While these assaults on conservative free speech are most common on college campuses, the Daily Caller reports on an outrageous suggestion by twenty climate scientists that the criminal law be used to go after critics who dare challenge their anthropogenic global warming theory: 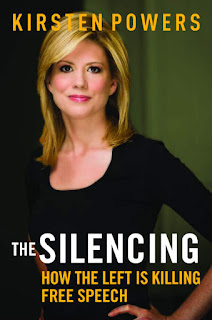 The science on global warming is settled, so settled that 20 climate scientists are asking President Barack Obama to prosecute people who disagree with them on the science behind man-made global warming.

Scientists from several universities and research centers even asked Obama to use the Racketeer Influenced and Corrupt Organizations Act (RICO) to prosecute groups that “have knowingly deceived the American people about the risks of climate change, as a means to forestall America’s response to climate change.”

RICO was a law designed to take down organized crime syndicates, but scientists now want it to be used against scientists, activists and organizations that voice their disagreement with the so-called “consensus” on global warming. The scientists repeated claims made by environmentalists that groups, especially those with ties to fossil fuels, have engaged in a misinformation campaign to confuse the public on global warming

But these riled up academics  aren’t the first to suggest using RICO to go after global warming skeptics. The idea was first put forward by Rhode Island Sen. Sheldon Whitehouse, who argued using RICO was effective at taking down the tobacco industry.

... Earlier this year, Democratic lawmakers began an investigation into scientists who disagreed with the White House’s stance on global warming. Many of these skeptical scientists were often cited by those critical of regulations to curb greenhouse gas emissions.

Arizona Democratic Rep. Raul Grijalva went after universities employing these researchers, which resulted in one expert being forced to get out of the field of climate research altogether.

“I am simply not initiating any new research or papers on the topic and I have ring-fenced my slowly diminishing blogging on the subject,” Dr. Roger Pielke Jr. of the University of Colorado wrote on his blog.

“Congressman Grijalva doesn’t have any evidence of any wrongdoing on my part, either ethical or legal, because there is none,” Pielke wrote. “He simply disagrees with the substance of my testimony – which is based on peer-reviewed research funded by the US taxpayer, and which also happens to be the consensus of the IPCC (despite Holdren’s incorrect views).”

As Parker notes in "The Silencing":


The illiberal left...believes that people who express ideological, philosophical, or political views that don't line up with their preferences should be completely silenced.  Instead of using persuasion and rhetoric to make a positive case for their causes and views, they work to delegitimize the person making the argument through character assassination, demonization, and dehumanizing tactics.  These are the self-appointed overlords--activists, university administrators. journalists, and politicians--who have determined what views are acceptable to express.  So, shut up --or else.

While power of government is used to go after disfavored political speech in other countries, conservatives and liberals, Republicans and Democrats, should be united in agreeing these practices have no place in this country which cherishes a tradition of free speech as a bulwark against political tyranny.
Posted by Paul K. Ogden at 5:17 PM

From this leftist's perspective, laws like RICO and civil forfeiture statutes have been used as a means to prosecute, and persecute, where the State or the Government is unable to prosecute a person or persons for the "real" criminal activity of which the person or persons is/are thought to be guilty. In other words, the State or Fed cannot meet its burden for probable cause, much less reasonable doubt. To build a case to imprison, RICO comes into play. To cripple the ability of a party to defend, seize property. Specifically, though, in the context of this column, it is reprehensible to seek criminal prosecution of a person or persons because of a belief. Why worry about global climate change as a reason to advocate broader use of renewable forms of energy and a clean environment? We can argue the merits of human-caused climate change, so long as we are not in jail. We should want renewable energy and a clean environment because they make economic and aesthetic sense.

Climate fraud is the product of organized crime. Prosecute statism, which is solely reliant on the perpetration of fraud for its advancement.

In his six and one half page history Weart states, "It is a peculiar history where the main actors are committees and no seminal papers or scientific giants emerge... He also states, "I have certainly not been able - any more than the IPCC (Intergovernmental Panel on Climate Change) in its lengthy reports - to present a convincing case, based on logic and observations, of why anyone should believe the consensus statements."

This physics historian also states, "The IPCC and the NAS (National Academy of Science) and their members have been highly reluctant to make public any documents or recollections about just what goes on in the committee deliberatiions."

My name is Prometheus. I like Paul Ogden have been reading Ms. Power's book and have found it to be a breathe of fresh air. I wanted to speak to you one and all now. About the silencing of dissent within the Hoosier state. This insidious process has gone on for sometime and is perpetrated by the elites in both of the major political parties in Indiana. And very possibly among the members of some of the state's third political parties. This state is becoming more and more a state of men not of laws. Those of us who have tried to blow the whistle on the corruption of the past thirty or more years in Indiana. The Gary Welsh's, the Paul Ogden's, the Charlie White's, and countless others known and unknown have suffered nothing but abuse at the hands of the people and institutions that are supposed to protect our rights. I know for a fact that more and more people and not just readers of this blog have been increasingly sensing that this state has become the opposite of what it should be. But most continue to shrug it off and think they are overreacting. The media in this state and it's elected officials will not tell you the truth about the evil in this state I will. All that evil needs to survive is the consent of good people. STOP GIVING YOUR CONSENT! REFUSE TO PLAY THEIR GAME THAT SAYS YOU MUST BE A COG IN THEIR MACHINE. DON'T LIVE BY THEIR SOUND BYTES BUT BY THE JUDGEMENT OF YOUR OWN MIND. Work tirelessly to cast out every parasite draining the life blood of our state. Dick Lugar was beaten. Now it's time to defeat the other vultures. The Delaney's, Bayh's, Ballard's, Daniels's,the Greg Purvis's and every party hack in Indiana! I implore all Indianapolis residents to move out of the city. The world the political class wanted in Indianapolis is the one they have created let them deal with that! Call, mail, and email every member of the legislature and get on their case in such ferocity and numbers that they will be to afraid to keep allowing Indiana to slide further and further into a Banana Republic! To all you elites out their your time is running out! We know they game you are playing! Do you hear me Abdul Shabazz? We know you are a establishment clown and we know what your friends are up to. Go back to Illinois where you are from.

Mark Small. Stay away from the Church of Cannabis. You can do better for a client than them.