This weekend I had a chance to attend the Americans for Prosperity Defending the American Dream Summit held in Columbus, Ohio.  As my liberal friends will be quick to point out, AFP is funded by the Koch brothers, those "reactionary" billionaire brothers who fund conservative/libertarian causes and candidates.  Let's forget there are liberals on the other side - George Soros ring any bells - who do the same thing. 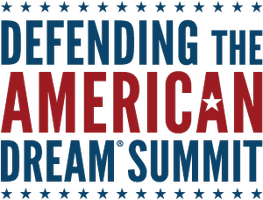 The summit was attended by, according to organizers, 3600 plus people who came from all 50 states.  AFP focuses on economic issues, particularly removing regulations and allowing the marketplace to operate without impediment.  An example would be fighting state and local taxicab regulations that are being used to try to shut down private enterprises like Uber.  Lest anyone thinks these are uncontroversial issues that Republicans can win on, AFP has also promoted right to work laws  and challenges to prevailing wage laws.  Those issues split off some labor supporting Republicans and GOP politicians.  Most notable among those is Republican Ohio Governor John Kasich who was criticized by some presenters at the convention for his failure thus far to support right to work and other labor reform measures.

Bush's reception was polite.  He spoke entirely in front of the podium, going from one side of the crowd to another.  The presentation came across as a bit over rehearsed.  Unlike every other speaker, Bush didn't talk about the humble circumstances of his family's background - undoubtedly because he didn't have that background.  He threw a little red meat out to the crowd on some social issues, like the Planned Parenthood controversy, but avoided topics that might be divisive with the crowd.  Behind me a woman would periodically yell out "What About Common Core?" the nationalized education standards Bush supported that have become anathema to many conservatives.    Bush's speech didn't gain any supporters in the crowd, but it probably didn't lose what little support he had in the crowd before he started.

Next up that first day was Governor Jindal.  Jindal started out slowly. talking about his Indian immigrant parents and how they embrace the United States because of the opportunity this country provided them to succeed via hard work.  Jindal talked about his record in Louisiana in terms of economic development.  Jindal then turned to social issues, talking about his unwavering support for religious freedom.  The one that won over the crowd was Jindal's reporting what happened just a day or two earlier.  A crowd of Planned Parenthood supporters had showed up at the Governor's residence. to protest Jindal's cancelling of the state's PP contracts.  Jindal responded by setting up big TVs to screen the Center for Medical Progress' Planned Parenthood videos for them.  Needless to say the PP supporters couldn't stomach watching the videos so they moved further away from the residence.  By the end of Jindal's speech he had won over the crowd.  People rushed the stage to shake his hand.

On the second day the opening speaker was Cruz.  Cruz was easily the most popular presidential candidate at the convention.  He spoke entirely in front of the podium and connected well while dishing out red meat to the conservative audience, telling them all he would do on his first day in office.  Cruz sometimes comes across as a bit dowdy on the campaign trail, but when given the opportunity to talk at length he is a dynamic speaker.

Next up was Rubio.  The Florida Senator talked about his own humble beginnings.  He threw out the conservative red meat on economic and social issues that the crowd liked.  Because of his involvement in trying to work an immigration compromise, I had heard a lot of complaints about Rubio before the speech.  Rubio didn't address immigration in his speech, probably a wise move.  He won over a few people in the crowd, certainly more so than Bush, but I get the feeling he might not be seen as not quite ready for the presidency.  Unlike the others, Rubio has a tendency to come across more as a policy wonk type guy.  He also suffers from the unfortunate (at least for politics) affliction of looking ten years younger than his 44 year old age.   Even though Rubio and Cruz are the same age, Cruz for some reason seems older.

Last up was Perry.  The ex-Governor from the Lone Star state started out talking about his own humble background.  He then spoke about the economic success Texas had when the rest of the country was struggling through the Great Recession.  Perry took some jabs at unnamed Republican Governors running for President (undoubtedly Walker and Bush) who supported certain things in office and something else entirely on the presidential campaign trail.  Perry consistently tied his views to his record, for example saying he was opposed to Common Core and accepting federal Race to the Top money from the beginning.  Perry then started telling touching personal stories of his talking to WW II veterans and viewing where U.S. soldiers landed on Omaha Beach on D-Day.  When Perry did that he left the podium to walk toward and reach out to the audience, a move that gave his comments greater impact than if he had stayed behind the podium the entire time or never used it at all.  Of all the speakers, I would rate Perry the best with Cruz second and Bush last.  Perry certainly won over many in the crowd. Unfortunately for Perry though it is probably too late to save his campaign.

The presidential candidate discussed the most at the conference was Donald Trump.  I heard a considerable number of favorable comments about Trump.  But I also overheard numerous conversations of attendees trying to educate other conservatives on Trump's numerous statements on economic and social issues which demonstrate Trump was a liberal in the not so distant past.  I left with the impression that half the conservatives at the event (almost all of whom are very much anti-GOP establishment) wanted Trump as the nominee, while the other half will support anyone but Trump as the nominee.
Posted by Paul K. Ogden at 2:44 PM

Paul, Thank you for the balanced report.

Thanks for the informative reporting Mr. Ogden. Unlike the Koch brothers who seek to advance the cause of liberty; Sore-ass is bent on destroying what's good about America.