The Next Crisis Around the Corner: Student Loan Debt

CNBC has an excellent article, published in the USA Today, on the next crisis that awaits - the growing student loan debt young people are incurring:


The numbers are staggering: more than $1.2 trillion in outstanding student loan debt, 40 million borrowers, an average balance of $29,000.

It's not hard to find indications that student debt is a large (and growing) problem. But unless you or someone you love holds student loans, it can be hard to feel the problem's immediacy.

That may not be the case for long. Mounting student loan debt is ricocheting through the United States, now affecting institutions and economic patterns that have been at the core of America's very might.

Men and women laboring under student debt "are postponing marriage, childbearing and home purchases, and...pretty evidently limiting the percentage of young people who start a business or try to do something entrepreneurial," said Mitch Daniels, president of Purdue University and the former Republican governor of Indiana. "Every citizen and taxpayer should be concerned about it." 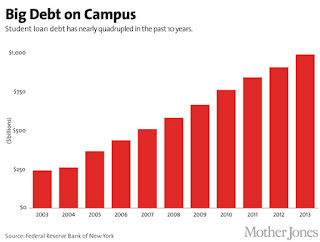 I have often been critical of Daniels as Governor.  But as President of Purdue, Daniels has been a leader on the growing student loan debt crisis.  Unlike university administrators across the country, Daniels has talked about the need to control higher education costs that have spiraled upward the last few years as universities have gone on a building boom.  While some will argue for "free" college education, that merely switches who foots the bill.   If taxpayers are paying the bill there will be even less incentive for cost control of higher education costs.

The article continues on about the impact of the debt:


The high levels of student debt are also serving to perpetuate and even worsen economic inequality, undercutting the opportunity and social mobility that higher education has long promised. Americans almost universally believe that a college degree is the key to success and getting ahead—and the data shows that, generally speaking, college graduates still fare far better financially than those with just a high school diploma.

But for those who are saddled with massive student debt, even getting by can be a challenge, much less getting ahead.

"You wind up disadvantaged just as you begin. It has reduced the ability of our educational system to be a force for upward mobility, and for an equitable chance at upward mobility," said Melinda Lewis, associate professor of the practice at the University of Kansas School of Social Welfare. "It is still true that you are better positioned if you go to college, but you are not as much better positioned if you have to go to college with debt."

Even though state support of higher education continues to increase, it has not kept up with the above-inflation increases in tuition and room & board.  The article notes this fact.

The gap has been bridged by students taking on more and more debt.  This situation has increased with the proliferation of for profit post-secondary education establishments that have worked hand-in-hand with lenders.   Lenders are more than happy to make such loans because, unlike other unsecured debt, it is next to impossible to discharge student loans in bankruptcy.

There also has to be an emphasis on students taking courses of study that can lead to profitable employment post-education.  Traditionalists praise the benefits of a liberal arts education and that college is a place where future employees will develop "critical thinking skills" that will be appreciated by employers.  I so wish that were true and that employers would be patient enough to hire and develop talent employees who enter the workforce with general education degrees or degrees in different areas.  But the world we live in today is filled with employers who want to hire college graduates who are ready to enter the work-force, knowledgeable about the subject area, from Day 1.

The lengthy CNBC article is a must read for those interested in knowing about our next financial crisis.
Posted by Paul K. Ogden at 5:00 PM

Well, if student loans were dischargeable in bankruptcy & were NOT guaranteed by the feds, prices for tuition, books, room, board, etc. would HAVE to decline simply because there would be less money chasing the college degrees.

Great post, Mr. Ogden. The sad thing is we've seen this coming for a long time. Tuition has skyrocketed the last 15 years as university budgets have grown fat with high paid administrators and shiny new buildings pop up everywhere. Universities say they have to spend the money to stay on top of the various BS rankings and attract the best and brightest students. What the hell happened to the core mission of simply educating people and performing research to better society?

I think you're on to something LamLawIndy. Quit enabling excessive borrowing and force people to think more practically. parents could do a better job of teaching their kids the value of money too.

There are several factors contributing to the record amount of student loan debt.
1) no reason for a college to hold college tution cost down, charging more does not result in fewer students.
2) debtors love student loans, high rate of interest with guaranteed payback, no risk to the lenders
3) gullible students who are encouraged by every high school that college is the only path to succeess.
4) gullible students and parents who do not evaluate cost/benfits of most college degrees

Well, I think you're onto something, but it would take a HUGE reorientation of the education establishment. Most teachers go to college, so that's their frame of reference; they (logically) believe in encouraging their students to do the same.

Indy Rob seems to have overlooked that federal loans account for more than 90% of student borrowing. But let's blame students, parents, and private lenders.

Massive federal student loan write off and forgiveness is coming. Particularly for those who attended the for profit money laundering programs. It has already started with Corinthian. Devry, UOP, and others aren't far behind.

Nicholas,
I said nothing to indicate that I was talking about private lenders only.

Debtors include the federal governement, who does not evaulate whether a graduate will have the means to pay back a loan and also passes laws that prevents the debt from being discharged through bankruptcy. I am surprised that Congress has not passed the Federal Student Loan Legbreakers Act in which the federal government breaks the legs of anyone defaulting on their loans.

It ends up placing a lot of kids in indentured servitude to pay the loans back.

I actually wonder how many students just don't bother to pay back their loans once they are working, even if they can? Perhaps the problem is that lenders aren't doing more to recover the finances?