First, Ballard lost an attempt to keep alive the $1.75 billion Justice Center that unnecessarily featured a third party, WMB Heartland Justice Partners, building the facility and acting as the city's landlord for 30 years.  An independent analysis of the project indicated that, contrary to administration's claims, the project would be tens of millions of dollars in the red after just a few years, necessitating a tax increase.  Of course, Ballard, who has pushed for 40 plus tax and fee increases during his seven plus years in office, would not have a problem with that.

Second, Ballard suffered an even bigger blow when the council voted 23-6 to sue the Ballard administration over it entering into a no bid contract with Vision Fleet to rent 425 electric vehicles.  Vision Fleet would be responsible for maintaining the vehicles.  The Indianapolis Star reports:


Council attorney Fred Biesecker said the city illegally entered a no-bid agreement with Vision Fleet. The contract should have been bid because it was a purchasing agreement 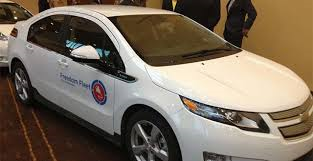 — not a services contract — and should have been handled by the Office of Finance and Management and approved by the Board of Public Works.

"The administration doesn't get to ignore state and local procurement law," Biesecker said in an email to The Indianapolis Star. "This contract should have been competed."

Gary Welsh of Advance Indiana sums up concisely the fiasco involved in the execution of the Vision Fleet contract contracts.


The administration initially entered into a no-bid lease agreement with Vision Fleet but later entered into a second agreement masked as a services agreement with the company after it realized the original lease agreement could not be characterized as a services agreement exempt from public bidding laws. City officials backdated contract documents to make it appear the second contract had been entered into months earlier than it actually had been entered. In so doing, it failed to revoke the original contract. The Marion Co. Auditor's Office also learned that the administration had illegally tapped [$293,000 in] storm water funds to pay for some of the costs associated with the contract.

Biesicker claims that the administration violated five state and local laws in its handling of the matter.

What gets lost in the shuffle of the illegality of the Ballard administration's actions, is the fact that the deal is certainly not good for taxpayers.  Ballard claims that the deal saves taxpayers $8.7 million.  That claim is based on an estimate that the city spends $9,010 per year per gas-operated car while the electric cars only cost $7,380 a year to operate.

These estimates are based on a claim that Indianapolis owning and operating a fleet of cars costs 75 cents a mile.  This is despite the fact that the IRS standard mileage deduction for 2015 is only 57.5 cents.  Meanwhile, the city claims it can lease electric cars, mostly Chevy Volts, not directly from a dealer, but from a newly-created company, which will only end up costing 65 cents a mile, assuming of course the cars are driven a considerable amount of miles per year.  Because members of the Department of Safety, chiefly police officers, are amassing the kind of miles necessary to make the numbers even look plausible, they are the ones assigned the car. As we found out from the council hearings on the subject, the cars are entirely unsuitable for police work.

Bottom line is that if using electric cars was cheaper than gas powered vehicles, other cities would have gone to an electric fleet.  Instead Indianapolis is the first city to attempt that transition.  If the Mayor wants to sell the transition as good for the environment or a step toward reducing dependence on foreign oil, he should make that case.  Instead, he chooses to continue with the false narrative that the electric cars are about saving taxpayer money.  Clearly that is not true.

With seven months to go, the Ballard administration is clearly dead in the water.  The best the remaining members of that administration can hope for is that the FBI doesn't come knocking on their door to talk to them about all the illegal shenanigans that have been pulled to put taxpayer money into the pockets of politically-connected companies.
Posted by Paul K. Ogden at 10:37 AM

Gary, not only is Greg Ballard a faux-conservative Republican he is low intellect. I say this not to be nasty but because the valid points you raise in your article disproving the phony narrative of his illegal Vision Fleet can easily be located with simple internet searches. Mr. Ballard has been able to push through anti-taxpayer crony pay-to-play deals in the past, often with the assistance of Democrats and his automaton CCC party idealists, but this particular insider deal brings with it a high degree stink and lawlessness -and it is a lawlessness that is proved by Ballard's own administrative paperwork. Greg Ballard lied again, pure and simple. Ballard's loyal RINO "R's" on the Council really had no choice but to sue him; Greg Ballard has done immeasurable harm to Marion County Republicans- incumbents and those running in November. Yes, Ballard is done and dead in the water. I wish harm on no one but it would only be fitting for Greg Ballard's crony deals, this one included, to all be submitted for Grand Jury consideration. These Grand Jury investigations would include all of Ballard administration staff people... those present and those moved to sports corporations for "safety" and "future pawn use".

He's not a RINO, he's standard issue Republican. From the courthouses to the White House, Republicans have long been profligate spenders. The party is kept alive by the myth that it supports small government and low taxes, but the evidence strongly shows otherwise. What county in America is more Republican than Hamilton, and yet the one-party system in the county shows nothing like fiscal restraint?

Republican is the party of high spending, debt, regulation, taxation, surveillance, and war. It is controlled by the politicians who Republican voters elect, and not by RINOs or liberals.

Mr. Martin, you make me laugh... and heartily. I suppose the liberal Democrats have been on the vanguard of reduced spending and balanced budgets? Untrue, my friend, spectacularly false. RINO Republicans are indistinguishable from liberal Democrats and in that instance you may have a point but there is a difference between a RINO and Constitutional Conservatives. Mr. Ballard is NOT a Constitutional Conservative and I can make the assertion based on Mr. Ballard's actions and deeds. It is "true" Conservatism that you do not understand in the least and revert instead to the false mantra of the left of center liberals. I supposed it was "standard issue Republicans" who alone have plunged this country trillion and trillions and trillions in debt that in all honesty can never be repaid? Oh, wait.... Obama, Pelosi, Reid, Schumer, Wasserman-Schulz (nationally) and locally we have a plethora of Council liberal Democrats who chomped at the bit to shove our dollars to Angie's List and with baited breath are ready to cram our dollars to the crony digital billboard interests. The pot calls the kettle black.

Anon 8:02 - I largely agree with your analysis. I just don't understand what rights liberals are trying to take away from Christians. Can you explain (preferably without resorting to far-fetched scenarios involving bakers and gay weddings)?

Anon 12:56 - I don't really know where to begin. Are the "true conservatives" the ones that never get elected? You insinuate that the conservative movement is not responsible for the actions of those it elects. Who, then, is responsible? Further, why should anyone, even those who believe in conservative dogma, elect a Republican if all they are going to do is cut a series of pay-to-play deals?
Ex. 1: Pedcor
Ex. 2: Blackwater
Ex. 3: Angie's List
Ex. 4: Vision Fleet
Ex. 5: IBM/FSSA privatization scheme
Ex. 6: IN Charter School Programs

Further, Anon 12:56, as to the "trillions in debt that in all honesty can never be repaid," you may want to check your facts. When measured by president, Obama added $6.167T to the debt; W. added $5.849T; Clinton added $1.396T; H.W. added $1.554T; St. Reagan added $1.86T. All the presidents from Washington through Carter combined for approximately $1T. Can you explain how this is all "obamapelosireidwasserman-schulz" who managed to run up all that debt?