Never thought I'd see the day when Breitbart would cite approvingly a Salon article, but that happened this morning.

The Salon article titled  "Here’s how Bernie Sanders could win: The one issue where Hillary’s vulnerable, and where the Tea Party might be right", discusses how corruption in government and the very closely related issue of crony capitalism could be the key to winning the White House in 2016. 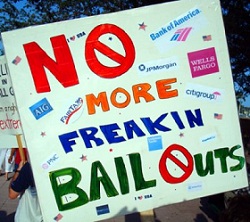 
Our government is so corrupt it is odious even in the eyes of patriots. In a Gallup poll measuring reputations of professions, nurses finished first; 80 percent judged their integrity to be high. Members of Congress finished last at 7 percent, a full 14 percent
behind lawyers. Even these numbers don’t capture the depth of public anger. If the anger turns to cynicism millions will walk away from politics. Millions already have. If it finds a voice we may have an Arab Spring of our own, maybe as soon as 2016. If so, the less-prepared party will be blown away. As things stand now, that would be the Democrats.

Republicans are by nature better at ginning up anger, but lately it’s as if they had the patent on it. Progressives were first to oppose the 2008 Wall Street bailout. The first protest was hosted by TrueMajority, a liberal advocacy group founded by Ben Cohen of Ben & Jerry’s ice cream fame. But by 2009 Obama owned the bailout and word went out that to attack it would only undercut him. Enter the Tea Party, amidst cries of “crony capitalism,” to tap the rich vein of public anger. For the first time, economic populism was the property of conservatives. It was some gift.

As for the Democrats, Hillary Clinton may not be the worst person to fly the reform flag, but then again, she might be. Her first problem is her past. If the Clintons didn’t invent pay-to-play politics, with such minions as Rahm Emanuel and Terry McAuliffe in tow, they came close to perfecting it. Her second problem is her present: her special way of handling her email; the alleged conflicts of interest over at the Clinton Foundation; the pricey speeches she gave and Bill still insists on giving. Her third problem is how she handles questions about it all: her defensive tone; her far-too-clever syntactical evasions; her insistence on being praised even as she stumbles; and, yes, her seeming sense of entitlement.

In a June 2 Gallup poll, 57 percent of respondents said Hillary is not “honest or trustworthy.” In a Public Policy Polling survey of Ohio voters this week, she led Sen. Ted Cruz (R-TX) by a point and was tied with Sen. Marco Rubio (R-FL). The first poll explains the others. This week, Bill Clinton said he’ll stop giving $500,000 speeches if she becomes president. Yesterday, Hillary went to New York City to deliver a populist-themed speech. Neither Clinton has a clue about the depth of public anger over watching big-money interests treat government as their personal toy. If Clinton loses the nomination or the general election, this will be the reason why.

This is the very point I've been trying to make for so long. The economic populist positions of the Tea Party, which includes opposition to things like corporate welfare, taxpayer bailouts, and pay-to-play politics, resonate across party lines. Yet, by nominating the establishment Mitt Romney in 2012, the GOP gave up using those crony capitalism issues against President Obama who had come to embrace the policy of bailing out failed big business that began under former President George W. Bush.

It looks like in 2016 Republicans will again be handed a chance to win the White House against another anti-populist, Wall Street Democratic nominee. Will Republicans instead nominate a Main Street populist, someone who can connect with working men and women while demanding that politicians stop rigging our capitalist system to favor politically-connected big business? More specifically, will Republicans be foolish enough to nominate the 2016 version of Mitt Romney, someone like former Florida Governor Jeb Bush, to run against Hillary Clinton? Only time will tell.
Posted by Paul K. Ogden at 1:52 PM

There are United States voters today who have never been able to vote for a “real” Conservative; the last time Americans could vote for an honest-to-goodness Conservative with an actual philosophical hold on the doctrine and a spine to support that mindset was for Conservative candidate Ronald Reagan in 1980 and 1984; voters of all parties provided unbeaten landslide victories to man who would prove to be one of America’s greatest statesmen. If Ronald Reagan made only one great mistake it was at his first Convention where he decided to reach across the aisle to establishment “R’s” and bridge the gap between Conservatives and Establishment and ask RINO Establishment Republican George H. W. Bush to run as his VP.

Ever since Reagan, the Establishment Republicans- who detested Reagan and those of us who are Constitutional Conservatives- tried and tried to be “Democrat-Lite” but voters will always vote for the real Democrat. It was the pathetic candidate John McCain who actually gave us Socialist Barak Obama’s first term and when Obama was mortally wounded for re-election East Coast Republicans shoved Mitt Romney down our throats. Mitt Romney gave us Obama's second term and more damage to the Constitution in reversing the “small government” ideas Reagan solidified during his time.
I’m not so sure the untrustworthy aged Hillary Clinton will be the Democrat nominee- a devious lady who I truly believe is always running for office to keep the millions of dollars flowing into the money laundering scheme known as "The Clinton Initiative"- but I am sure that if the national GOP thinks it can win with Jeb Bush, Mr. Kasich, or a person like the jokester Lindsey Graham, the national GOP led by East Coast Republicans is dead wrong(again).
Liberal Democrats rail against the Tea Party but that is because they fear it. They know that there are Tea Party Republicans but there are also Tea Party Democrats, Tea Party Independents, and even Tea Party Undecideds. That is why left liberal Democrats mock, bully, and throw their hate on the Tea Party. America today is actually being ruled… and I mean “ruled”… by a minority. Most people are Conservatives but don’t see the connection between how they live their lives and the liberal spendthrifts hell-bent on crony government and insider pay-to-play dealings. That we Americans actually expect dishonesty and personal financial gain over State and National interests tells us how very low the bar has become. We see in the ludicrous Obamatrade how Mitch McConnell and Paul Ryan and John Boehner shed every promise they made in their last re-election campaigns and the fact is again illuminated with klieg lights there is no distinction between liberal Democrats and establishment Republicans… not a bit.
I vow on my father’s grave that I will stay home on election day if I am again “offered” no “real” honest-to-goodness Conservative candidates for whom to vote. My votes for the sad McCain and the pretender Romney turned out to be for the guy in the White House and his political monkey Democrats who have wreaked such grave damage to this nation.

so just who would the "real" honest to goodness Conservative candidates be?