A common joke is that "If it is on the Internet, it has to be true."  Only to liberals, that's not a joke.  That is a statement of fact...well at least if it involves a quote putting down a conservative politician. 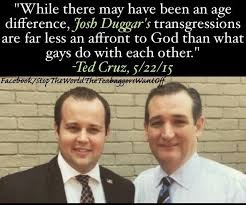 Recently, liberals have taken to Facebook and other social media to spread made up quotes by conservative politicians defending Josh Duggar, who has admitted to when he was a teenager having an inappropriate relationship with five underage girls.  Here is a sampling of the quotes::


Michele Bachmann:  "Someone close to me successfully prayed away the gay so I have no reason to believe Josh Duggar didn't successfully pray away the pedophilia.  Jesus is the cure for all unnatural desires."  5/23/15

Mike Huckabee:  "Josh Duggar was a teenager, the girls were almost teenagers.  In biblical times they could have married.  The only reason liberals are attacking Josh is because he has been a faithful warrior against the perversion of homosexuality."  5/22/15

Ted Cruz:  "While there may have been an age difference, Josh Duggar's transgressions are far less an affront to God than what gays do to each other."  5/22/15

In declaring that the above quotes to be "false," Snopes notes that the fake quotes originate from:


"Stop the World, the Teabaggers Want Off .. an entertainment Facebook group that frequently mocks conservative politicians and pundits with fake quotes, and their disclaimer states that their 'page is for entertainment purposes' and 'is NOT meant to be taken seriously.'"

Of course, the Stop the World folks know perfectly well that their made up quotes will be copied and passed along by their liberal friends as fact, which is the whole point of making up the fake quotes in the first place.

Yep, for a liberal if something is on the Internet, it has to be true.
Posted by Paul K. Ogden at 10:26 AM

You can't seriously be suggesting that internet hysteria has a uniquely or even primarily liberal component. Online hoaxing and wide-eyed conspiracy theorizing seems pretty ideologically agnostic to me. How do you account for, say, the fever pitch surrounding the Jade Helm war games or rumors that Obamacare will require a Revelations-style marking of the head and hand or any number of similar paranoiac fantasies. from the other side of the aisle.

Satire and irony must be beyond your intellectual capacities, Paul.

The whole point of my article is that liberals can't figure out what is satire (it's not "irony")and are simply repeating it as fact.

You say he had an inappropriate relationship. He molested his sisters!!! What is wrong with you people??!!

What's more concerning is that these are quotes that can be genuinely believed to have been stated by their respective sources, given what we know of the Republican view on rape and such. And Huckabee especially pumps out homophobic and offensive nonsense weekly.

Anon 2:08, that's because of something in the law known as "defamation per se." If you falsely allege someone has committed a crime they don't even have to prove damages in a civil suit. That's why media outlets are very careful in what words they use.

Missed the point entirely. Republicans don't need false quotes to ruin their reputations when they've already done a fine job doing that themselves. Mike Huckabee has already denied himself the presidency with his hateful rhetoric. Anyone can google the thousands of awful things he has said, that were not fabricated.

Satire, Paul, is the use of humor, irony, exaggeration, or ridicule to expose and criticize people's stupidity or vices, particularly in the context of contemporary politics and other topical issues.

"Liberals" are mocking these "values conservatives" with spurious "quotes" that "could" be theirs (a point which anon 4:45 nails).

No, Paul: you're missing the point of anon's comment. You assume that "liberals" (whosoever they may be) are repeating the "quotes" as "true" when it's entirely within the realm of possibility that they're repeating these "quotes" because they're darned amusing.

Susan, the problem with that theory is that when the quotes are pointed out as fake, the posters don't say they're just engaging in satire, they apologize saying they didn't realize it was fake.

I for one will admit that the fabricated quotes are annoying, especially when all the non-fabricated quotes are buried by them and the conservatives subsequently use the fabricated ones to overshadow them (as is being done here). There are other ways to make satire without misquoting people, because like I said earlier, Huckabee has done enough to ruin any chances he may have had at being president with things he's actually said.

I actually shared the Huckabee quote yesterday on Facebook before quickly deleting it after finding out it was a fake. But since Huckabee is Huckabee, you can't blame me or other people for believing those quotes are genuine. If the quote had been attributed to, say, Jon Huntsman, it wouldn't have made the rounds like it did.

Do you see where I'm coming from, at least?

Anon 5:41, yes I do know where you're coming from though as I think liberals have this reflext to think the absolute worst of all Republicans and, as a result, aren't skeptical of what they run across.

I absolutely agree that this type of Satire is poorly done, and damaging.

I've seen several of these from both sides and I HATE them, because, well, Anonymous is right, these people say enough ridiculous things, we don't have to make anything up.

But please don't delude yourself to thinking this is a "liberal" problem. Truly, I've seen some equally ridiculous things from the republican side of things, satire articles feeding major frenzies of racist sexist and bigoted fools.