That physical law is one you also see in politics.  In the political world success begets failure; failure begets success.  The 1980 Reagan landslide led to defeat for the Republicans two years later.  The 1992 win by Bill Clinton, led to the Democrats losing the House for the first time in decades in 1994.  Obama's win in 2008 and 2012 led to Republicans winning big victories in 2010 and 2014.

In politics, when Side A wins a battle, it relaxes while Side B organizes and, motivated, wins the next battle. Then B relaxes and Side A, motivated by its loss, wins.  This happens nonstop in politics. While unlike physics, the reaction is not "equal" it nevertheless is usually somewhat proportional. The bigger the victory the bigger the opponents' victory is likely to be the next time.

Which leads to this week's Religious Freedom Restoration Act debate.  Religious conservatives were ambushed by Freedom Indiana and its allies who at the last minute engaged in the worst sort of misinformation campaign about the law, falsely labeling it as a "license to discriminate" and encouraging their corporate partners to issue phony extortion threats.  While Freedom Indiana lost the legislative fight as Governor Mike Pence signed RFRA into law, the organization won a huge public relations battle.  Given the RFRA is completely irrelevant to LGBT rights, one has to wonder if Freedom Indiana's true motivation was to gin up a controversy to drive contributions to pay its undoubtedly growing payroll.

The action-reaction model is why a winning side in politics should always act with graciousness and humility.  Never kick opponents when they are down, never torment them, never engage in name calling, never ridicule them.  Doing any of that ensures that the reaction, i.e. retribution, when it comes...and it will come, will be much greater.  That's a lesson Freedom Indiana leaders do not seem to understand.  There will be consequences for the organization having engaged in one of the most vile, hate-filled political campaigns this state has ever witnessed. Freedom Indiana grossly 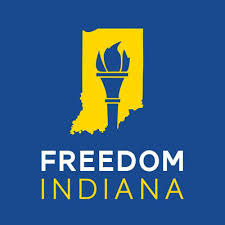 overplayed its hand, again for a cause which has zero impact on LGBT rights.

After Freedom Indiana's PR ambush, religious conservatives, as well as their other conservative allies, are not going to retreat and fly the surrender flag, sheepishly asking how they can make the other side happy so they won't be treated so mean next time around. They are going to regroup, organize better and smarter... and go on the offensive.  Freedom Indiana's guerrilla attack helped the organization win a battle, but religious conservatives are a much larger and more experienced political force.  Attacking religion and people of faith is not smart politics.

Does that mean Republicans will win more state legislative seats in 2016?  Given the limits of gerrymandering, that would pretty much be impossible as the GOP has pretty maxed out its possible gains.  But with religious types and other conservatives re-energized by Freedom Indiana's foolishly over-the-top tactics, 2016 is likely to be a good year for Republican state-wide candidates, including Governor Pence and the party's nominee for U.S. Senate.  While Governor Pence entered the RFRA debate having lost conservative support and facing possible re-election defeat, his steadfast support for the RFRA increases the possibility he can ride a re-energized conservative base to re-election.
Posted by Paul K. Ogden at 9:20 PM

34,000 churches have just severed ties with the Presbyterian Church over the same sex marriage issue: http://www.breitbart.com/big-government/2015/03/29/34k-black-and-latino-churches-cut-ties-with-presbyterian-usa-after-same-sex-marriage-approval/

What is FI doing to stop this disassociation, or could it have something to do with religious freedom?

Pete, Republicans are not going to win same sex marriage battle. I don't like to see it mixed up with religious freedom which is an entirely different issue and one Republicans will win all day long.

Advance Indiana's published text has to be as bad as anything Freedom has said. And the fact that Gov Pence couldn't outright say that it doesn't allow it on ABC says how much he is going to bend to that group. The PR campaign has been wholly won by Freedom. Convention and business pressure will have a mark on representatives if it is sustained. Not a known item so far.

I don't think for a minute that freedom indiana overplayed its hand. Rather, eric miller, curt smith, and the amateur idealogues that comprise the pence administration overplayed theirs, with the effect that indiana is now a laughing stock in the nation ( and world). Indiana taliban indeed.

So Anon 637, is Connecticut, Rhode Island and Illinois "Taliaban" too? They all have RFRA just like Indiana as does 30 other states. We have a national RFRA as well. So are all Americans Taliban too? You can't really preach tolerance when you're practicing intolerance and hatred towards religious people.

"The Indiana RFRA departs from ... the federal RFRA—on which many other state laws are modeled. How? Indiana’s RFRA expressly provides that a person can assert a 'claim or defense in a judicial or administrative proceeding, regardless of whether the state or any other governmental entity is a party to the proceeding'.”

ppaul....why havent you posted my response to your comment to anon 637...it was respectful, and relevant to the discussion....

Anon: 407, can you try to post again? I seem to have misplaced it in my email box.

Paul, my response to your response to anon 637 centered on the fact that indiana's statute is more expansive than the other states, and that since indiana does not provide protection to lgbt community, the new law does appear to allow discrimination under the guise of religious freedom. So i is a little more complicated than just saying x number of states and the feds have passes simpler statutes, and that bill clinton and barack obama supported such statutes. They are all different. But my point is that when the governor cites the fed statute and other states, he is being over simplistic.....

I really worry about the damage to indiana's economic climate. This is a serious issue.

I highly doubt that people are up in arms because Indiana's law is supposedly different from other RFRAs and therefore bad. I think Indiana could have copied the federal RFRA verbatim and you'd still have people falsely labeling it as a "license to discriminate." Plus it simply isn't accurate that Indiana's is somehow more expansive than other states. Connecticut for example has a law that says the RFRA applies only if a law "burdens" religion. Indiana, the federal and most states ay "substantially burden." As any attorney would tell you, that's a huge difference.

The difference between 1993 and today is that those on the left have grown very hostile to religion. There is no way the Democrats of today would have supported the federal RFRA passed in 1993.

As far as the economic climate goes, I'm not sure where these businesses are going to go since the RFRA is in 30 states and is nationally. Nonetheless, I don't think Indiana should ever give in to extortion attempts or reward religious intolerance.

If today's "clarification" has been edited & rewritten, by "local" through subsidy corporatists, the Vinyl Four (Pacers, Lilly, Cummins, Anthem); the "PR nightmare" will have only begun.

What's up with this rush-rush, pretend to fix it now, faux emergency, flailing; posed as capable, "deliberative" government?