Just some random political observations for a Thursday evening:

1.  Poor GOP Turnout in 2015 Will Doom Many Marginal Indianapolis Council Candidates - Once thing you learn in politics is that turnout is driven by the top of the political ticket.  Without a strong Republican candidate in the race against former U.S. Attorney Joe Hogsett expect deep Republican losses on the Council.  After the next election, Democrats on the 25 person council could easily reach 16. 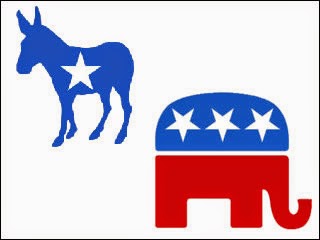 2.  Indy Democrats Will Heart David Brooks -  The Democrats will come to love the council maps drawn by Republican operative David Brooks.  By the time the next map is drawn after the 2020 census, the Democrats may control every council district north of Washington Street, with their majority reaching as high as 19 seats.

3.  Governor Mike Pence's Poll Numbers - While Governor Mike Pence's polling numbers are in the range of those of former Governor Mitch Daniels, there is a huge difference between the two.  Daniels' numbers were deep and, as such, he was able to withstand the political storms.  Pence's numbers are not deep.  The minute the inevitable storms hit the Governor's Office, like the JustIn snafu, Pence supporters leave him like rats escaping a sinking ship.

4.  Governor Mike Pence's Brand of Republicanism is Outdated - Governor Pence supported the State Police collecting bulk cellphone data without a warrant.  When faced with a House bill that strongly liberalized Indiana's marijuana laws, Pence insisted it be cut back.  Pence has pushed law and order issues while Governor.  When speaking on national defense issues, he has advocated a substantial increase in the defense budget.  He has signed off on several corporate welfare schemes pushed by the Hoosier pay-to-play crowd.   Pence seems oblivious to the fact that the Republican Party is much more libertarian, much more isolationist, much more populist, much less law and order, and more concerned about privacy issues than when he first began running for Congress more than 25 years ago.  If you think Pence is popular among Republicans, go to a Tea Party meeting and ask them what they think of the Governor.  It won't be pretty.

5.  Democrats for Governor  - The Democrats need to stop silly notion of Governor Glenda Ritz and come down to Earth.  Indiana House Speaker John Gregg or former Congressman Baron Hill would be very strong candidates and have an excellent chance of defeating Pence.

6.  Glenda Ritz for Superintendent of Public Instruction -  Don't believe the claims of Republicans otherwise, Ritz is well-positioned to be re-elected in 2016.  She has lost few of her voters from 2012 and is likely to add some Bennett voters who believe she has been treated poorly.  A well-run campaign puts her over the top.

7. Hillary Clinton - Democrats have fooled themselves into believing HRC is an exceptionally strong candidate.  Even without a serious opponent, she has made several blunders.  Meanwhile Republican candidates who once trailed her badly in state polls, often are shown as leading her.

10.  The Fight Over Religious Freedom - Galvanized by their success on same sex marriage, the left has foolishly double down, demanding that people set aside their religious faith and embrace their views.  Just 22 years ago, liberal activists overwhelmingly supported the Religious Freedom Restoration Act. Today they overwhelming oppose it.  When the question is whether two people who are in love should be able to marry despite being of the same sex, Liberals have a winning issue.  But when the issue is whether a photographer should be forced to photograph a same sex wedding despite the photographer's strong religious objections, Liberals lose the political debate.  Forcing mom and pop businesses into bankruptcy fighting legal challenges is not the way to win converts.  Expressing intolerance for people's religious views is not the way to win tolerance for the LGBT community.

11. Democrats Are Wearing Rose-Colored Glasses - Occupying the White House for the last six years has blinded Democrats to the serious problems their party faces.  Republicans have majorities in Congress unmatched for decades.  In the states, the GOP control an overwhelming number of Governorships and state legislative bodies.  Yet the Democrats sit around dispensing advice on how Republicans can fix the problems with their party.   Okay.

12.  Most Underreported Story is Democrats' Gender Gap Problem - The Republicans' struggle to connect with female voters, especially unmarried female voters, gets all the headlines.  But a bigger story, rarely reported, is how very poorly the Democratic Party does with male voters.  The Democrats' gender problem has caused them historic losses at the state level as well as control of Congress.

14.  CPAC Marijuana Vote -  Probably the most surprising vote at CPAC was that 41% of the attendees supporting marijuana legalization.  Not decriminalization, not medical marijuana, but full blown legalization.

15.  CPAC Demographics - 63% of the attendees were women (they apparently didn't know Republicans have launched a War on Women) and 47% were between 18 and 25.

16. GOP Trends More Libertarian, More Populist -  A Republican who can tap into the increasing libertarian and populist strain of Republicans could capture not only the presidential nomination but the White House.  It looks like the Democrats intend to nominate a pro-Wall Street candidate, i.e. Hillary Clinton.  If Republicans foolishly nominate a Bush, she can win.  If they nominate a new brand of populist conservative, the Republicans have a better than 50-50 chance of winning back the White House.
Posted by Paul K. Ogden at 12:15 AM

I think for the most your analysis is spot on. I disagree about Daniels poll numbers for much of his first term he was polling badly. His Re Election was due more to Democrat incompetence than anything else. Also while John Gregg would be a strong candidate for Governor. Nominating Baron Hill would be a big mistake. His votes for Obamacare, TARP, and his bad manners during town hall's he conducted led to him getting thrown out on his rear in 2010. Gregg on the other hand having never served in Washington is a point in his favor. Pence is just an empty suit and isn't serious enough to be considered evil. Speaking as a life-long and active Republican Daniels is an evil son of a gun who needs to be taken down a peg or two! Daniels deserves to rot in hell for eliminating state merit employment and his destruction of FSSA, DCS, DWD and the State Board of Accounts. Also he needs to be slapped silly for establishing the IEDC and for establishing the Inspector general's office. Those two agencies need to be dissolved. And much of the Governor's authority needs to be removed!

Paul, your analyses is very good. Marion County GOP will rue the day- if they are not doing so already- when David Brooks took control of those council maps. How poltical pawn and useful tool Ryan Vaughn got away with awarding David Brooks $225,000 (!!!) for the damage Brooks effected to the local GOP remains beyond many of us. I am moved to vomit every time I think that his wife Susan is in DC as a congress person.

Anon 1:18 is correct about Daniels. He is rotten to the core and he has damaged more than helped this State and its agencies.

Pence is so out of touch it is pathetic. Like Hillary Clinton, Pence looks grandparental in an out-to-pasture, rocking-chair on a boony porch sort of way. Pence has always been a mental light-weight who has known little but to spout the "ism's" of faux conservatism to retain his financially rewarding career.

Republicans are getting blown out across the country, and the party is dying.

The Republicans have lost their base, as they have declared war on the libertarians. The Republicans now openly stand for big government, little personal liberty, Israel, police power, military, anti-intellect, and many more positions that utterly turn off the anti-authoritarians.

Being a Republican is almost grounds for people to laugh at you.

The nominations of McCain and Romney, after seeing the sins of Bush, proved to everyone that the Republicans are done.

Really Anon 1057? Republicans are "getting blown out across the country?" Let's examine how that blowout is going:

State Legislatures: Republicans control 66 of 99 legislative chambers. Republicans Have complete control in 30 legislatures, while Democrats control both chambers in 11 legislatures. (The other 9 have split control.)

Governors: Republicans today have 31 of the 50 state governorships while Democrats have only 17. There is one independent.

Complete Control of State Government: Only seven states have a Democratic governor and Democratic legislature, the lowest level of Democratic state domination since the Civil War. Republicans have complete control of state government in 24 states.

Congress: Of the 435 member U.S. House, 247 are Republicans. That is the largest Republican House majority in 85 years. Republicans have 54 of the 100 U.S. Senators. Since Obama's election in 2008, Democrats have lost 70 seats in Congress and 900 state legislative seats. That is, respectively, a partisan swing of 140 and 1800 seats.

I'd like to focus on #16, which I think Paul nails. The 50-year GOP experiment with military Keynesianism, internationalism & desire to use state power for "virtue" has clearly failed. The GOP electorate simply wants to be left alone by government. It wants its savings to stop being debased. It wants debts to stop mounting. The ghosts of Sen. Taft & Rep. Lindbergh are smiling from above at this gradual righting of the GOP ship from its half-century meandering.

Paul, thank you for your cogent reply to Anon 10:57 (who will probably have to look up the meaning of "cogent").

I find that usually it is the liberal Democrats far-lefters who spout "the Republican party is dying" line. What is dying in the Republican Party is the Romney-Bush-McCain-Rove section.

Real Conservatives (vs "RINO" or establishment conservatives) are working to win back the GOP from the "Democrat-Lite" Republicans like John Boehner, Kevin McCarthy, and even Congressional novice but accomplished insider Susan Brooks.

The political philosophy that is on death ropes is the liberal and left liberal (so called "progressive") political ideology. Left liberalism, socialism, marxism, are all failed ideas rooted in the past. It is Libertarianism and Conservatism which is on the rise and which look to the future rather than looking backward.

"Let's examine how that blowout is going:"

And you proceeded to do everything but examine vote counts.

Democrats get more votes than Republicans.

Face it, after over a decade of Stewart, Colbert, Maher, Oliver, Olbermann, etc., you can't go into a modern, civilized area and find a Republican under 50.

I'm 39 & a Republican, though ideologically I'm pretty libertarian. I would've been a Bourbon Democrat in the late 1800s.

A few days late for the post but here goes.

RE: Glenda Ritz
She won by a landslide; however, let's examine the reason she won overwhelmingly. If no one has mentioned it, Ritz won the election, not for her acumen or expertise, or her grand vision for Indiana schools, but rather, she won because a massive majority of the voters were disenchanted, maybe 'sick of' is more appropriate of Bennett's perceived arrogance. Now that Ritz is in office, she's demonstrated her ineffectiveness and frankly, not quite ready for prime time. If she's as smart as I hope, she will NOT run for another public office. Seriously and speaking as a career educator, she's an elementary school media specialist, aka librarian, and for proof, take a look at the IN DOE homepage. At first glance, it's reminiscent of a first grade classroom bulletin board.

RE: Hillary Clinton
Any professional, a public servant should have the good sense, the sense that God gave a goose, not to use a private email or private email server, for public purposes. I can imagine I'd have been fired for corresponding from home with FERPA protected student records or any mention of students, discussions from an administrative meeting with district employees or the public, or any information I possessed based upon my public employee status and paycheck. I'm amazed that a woman with her supposed savvy acted in such a cavalier manner.

When the 4 million Americans living in U.S. territories are allowed to vote in national elections, the Republican Party hits immediate irrelevance.