Pete Rose, the all-time major league baseball hits leader, earlier this month submitted a formal reinstatement request to new major league baseball commissioner Rob Manfred that he be reinstated to the game.  In 1989, Rose had been banned from baseball for life for his having bet on baseball games as a manager, including placing bets for the team he led, the Cincinnati Reds, to win. 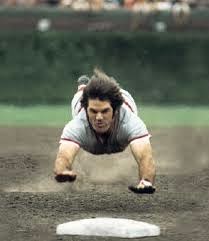 Here is one baseball bet you should make.  Bet on Pete Rose being reinstated before this year's July All-Star game.

Rose's 1989 deal in which he agreed to a lifetime ban, also allowed him to apply for reinstatement after one year.  Rose has submitted formal requests to be reinstated to Commissioner Fay Vincent in 1992 and Commissioner Bud Selig in 1999.  Neither request was acted upon.

This request has a different feel.  More time has passed. Rose's case has been aided immeasurably by the 1990s and early 2000s which featured scores of major league players, fueled by steroids and other performance enhancing substances, producing grossly inflated statistics.  In a sport that prides itself on comparisons between players and eras, those steroid-induced performances forever mar the sport's records books, undermining the integrity of the game.   In comparison to those players' attempted murder of the game of baseball, Rose's transgression now looks like speeding through a school zone.

No one knows what communications took place between Commissioner Manfred's office and Pete Rose's people.   But I would not be entirely surprised to learn that Manfred invited Rose to make another formal reinstatement request.  Manfred reinstating Rose would immediately seal his legacy as Commissioner and give him enhanced clout with fans moving forward.

But there is another reason.

Where is the All-Star game played this year?  Cincinnati.  The city where Rose for so many years led 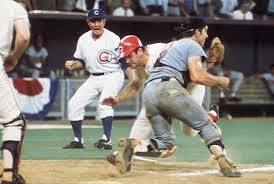 the Big Red Machine, winning two World Series in the process.  It will also be the 45th anniversary of the 1970 All-Star game, also played in Cincinnati, a game in which Rose bowled over catcher Ray Fosse to win the game for the National League in the bottom of the 12th inning.

Suddenly the mid-season contest, which has become exceedingly boring to watch, would take on new life as reporters from across the country would descend on Cincinnati to cover Rose's reinstatement, giving the sport a much need publicity boost in the process.

Commissioner Manfred has every reason to pull the trigger on Rose's reinstatement before the All-Star game.  Bet on it happening.  Okay, make sure you get odds, but still make the bet.
Posted by Paul K. Ogden at 10:18 AM