Speculation on Facebook today has been about the slating battle between two Democratic Indianapolis City-County Councilors, Angela Mansfield and LeRoy Robinson.   Current 2nd District Councilor Mansfield's home falls into the newly drawn 1st District, while Robinson, an At-Large Councilor whose district eliminated by the Indiana General Assembly, has moved into the 1st District. 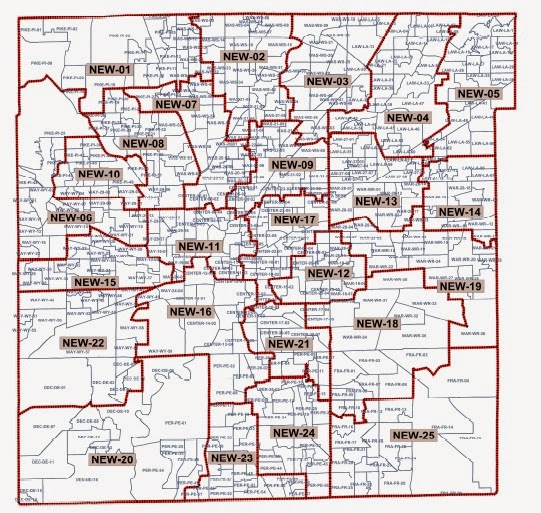 The new District 1 contains 26 precincts, 17 in Pike Township and 9 in Washington Township.  It is located in the northwest corner of Marion County.

The rules of the Marion County Democratic Party allow precinct committeepersons (PCs), both elected and appointed, vice precinct committeepersons (VPCs), ward chairpersons (WC) and vice ward chairpersons (VPC) to vote at slating.  There are approximately six precincts in each ward.   While PCs can pick their own VPCs, state Democratic Party rules only allow elected PCs to do so and that selection has to be done in writing by certified mail dated no later than Thursday midnight after the Tuesday election.  For PCs who are appointed, and elected PCs who don't comply with the foregoing rule, the appointment of a VPC is done by the county chair.

A review of records show that there are only six elected Democratic PCs in all of the new District 1.  All of those elected PCs are in Pike Township   Assuming half of those six elected PCs followed the rules to pick their own VPC without forfeiting that decision to the county chairman (a very generous assumption), the number of appointments of the county chairperson in District 1 slating will be as follows:

Thus, Marion County Democratic County Chairman Joel Miller has complete control over approximately 51 of 60 (85%) of the votes in Saturday's slating for District 1.
Posted by Paul K. Ogden at 5:51 PM

I wouldn't go so far as to pin this on Miller. Robinson or Mansfield could also pick and choose anyone they wish to slot in those spots and elect them at slating.

Anon 7:57, even under the best circumstances finding people who live in those precincts to run for PC and stay in position for four years is a Herculean. And then you have the problem that the Democrats rules lend themselves to a situation where the county chair will have a slew of VPC, WC and VWC appointments that can outvote even a full slate of PCs.

I don't blame Miller so much as I blame all party chairs who have deemphasized the importance of having elected PCs in favor of their own power.

For the last decade or so the powers that be in Indiana regardless of which party they are members of. Have been working to take by force that which they are incapable due to their inability and incompetence to obtain on their own. They are men and women who are not bright enough to shine their neighbors shoes. But who demand the salaries of company presidents. They are the parasites who control both parties in Indiana. The reason why those of us who have been harassed is because we believe in objective law and in the inalienable rights of men. We believe that human beings who choose to think. Must think and act on their own. That thinking men and women must live by the judgement of their own minds and reason. Our minds are a product of our individuality. Their can no more be a "collective brain" anymore than their can be a "collective stomach". Just as we all digest food as an individual. So to the extent to which we think we must do on or own. The reasoning mind does not allow itself to be dictated to by the whims, opinions, or needs of others. The people of reason reach their conclusions by the use of their own judgement. I do not recognize the right of a person or even the whole of mankind minus myself to the right to even one minute of my time or to a claim on my life. No matter who makes the claim. If the public good as our politicians keep telling us requires us human beings to live as aimless, mindless robots. People who have no pride of being and are entitled to nothing for our labors. Than the hell with public good we shall have no part of it! To those to whom this call to arms is addressed have been attacked and tried to be made examples of merely for insisting that the laws be enforced equally to all. I say that an attack or denial of the rights of one man or woman is an attack on the rights of all. So in that manner we have suffered. All to often we the people of this state and of this nation have allowed our elected and unelected leaders to take more and more power over our lives. In the name of "fixing" our economic and social problems. You have sacarificed more and more of your freedom and as a consequence you are all poorer and less free than you were before. I want to let you all know also our struggles have not be for nothing. We each know the joy all of us and the freedom of thinking and acting for ourselves. None of us follows blindly the opinions or orders of others. I hereby throw down a gauntlet to whatever remnant of humanity and individuality remains in our fellow hoosiers. The challenge is this: "In whatever way you can may it be large or small, whether it be exposing and fighting corruption at any level, or whether it be merely making an honest living and showing respect to your fellow human beings. Don't let the Holy Fire of Liberty go out spark by ever diminishing spark. By the way you live be the embodiment of reason, compassion, and individualism. Do not live as a parasite or a blind submissive. But as a great woman said : "Remember we the people are Dominant!" "So with that take out the whips of your individuality! Smackdown The Powers That Be!"

Anon 1:42: excellent comment, you speak truth to power. The younger set may never "get" your truth as the vast majority are taught nothing at home or at school about personal accountability, self-initiative, and that they have rights simply because they are alive and not because some big government bestows rights on them.

John Stossel has a new column today, "Parasites", with a theme that "politicians feed off others, while creating no wealth of their own." More truth to power.

Politicians and their grossly overpaid staff enjoy the good life, weeks of paid-time-off and paid holidays, the good money, in short all the good benefits never enjoyed by the majority of everyday working poor who pay those magnificent salaries to "people who aren't bright enough to shine their neighbors' shoes".