Science of Prenatal Development is What Makes Abortion Issue So Difficult

Over at Sheila Kennedy's blog this morning she rails against a bill introduced into the General Assembly which attempts to define "fetus" to include prenatal life at all stages of development:


All in a day’s work for the men who think they were elected to be obstetricians.

Far more annoying than this added evidence of legislative ignorance, however, is the persistence of efforts to control women’s bodies, to insert government into what should be personal and family decisions, and to make some people’s religious beliefs (no matter how uninformed, unscientific or unrepresentative) the law of the land.

Kennedy tries to turn abortion into a men v. women thing all the while ignoring the plethora of polls showing women are nearly as opposed to abortion as men, and sometimes even more so.  (See poll at bottom of the page showing women by a 50-46 margin are more supportive than men of a Congressional proposal to ban abortion after 20 weeks.)  And what are we to think of groups like Feminists for Life?  So do those pro-life women suffer the character flaw of men in that they want to "control" other women's bodies too?

Kennedy also suggests opposition to abortion is based on religion.  But what about all those people whose opinion on abortion has nothing whatsoever to do with religion?  There are plenty of atheists pro life people out there.  As for a possible breach on the Establishment Clause that Kennedy suggests without identifying, surely as an attorney she knows that just because a proposed public policy corresponds with a religious belief does not make that policy unconstitutional.  If it did, laws against murder would have to be thrown out.

Kennedy's apparent position is that developing human life is never deserving of legal protection, that the location of that life is what should be determinative of whether it can be terminated.  Kennedy's position would support abortion on demand up until the unborn baby leaves the birth canal. Fortunately very few people support such an extreme position.

My position on abortion changed during my sophomore year of college.  I was taking a Health Science class and decided to do my research paper on prenatal development.  While learning how quickly life develops within the womb, I ran across scientific literature on what actually happens during an abortion.  To say it was ghastly revelation is an understatement.  Needless to say, when the pro-abortion rights crowd tries to peddle the story that a fetus is just a meaningless blob of cells that is politely discarded during an abortion, I know better. 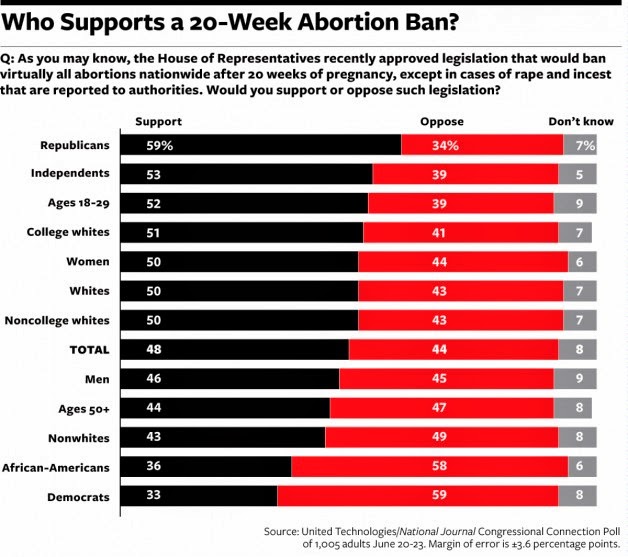 While my friend Sheila Kennedy is constantly decrying Republicans not believing in science, I find it a little odd that on the abortion issue she is on the other side shutting her eyes to the medical facts of how human life develops.  The only way you can conclude that the abortion issue is just about a woman and her body is to completely ignore the science of prenatal life.

The bottom line is that the abortion issue is much, much more complicated than the slogans spouted by both sides.  It involves finding a way to balance the very real interest a woman has in privacy and bodily autonomy against the very real and indisputable fact that there is a developing human being growing inside of her.

The debate about the legality of abortion should not be about when human life begins (which I think is pretty indisputably conception and implantation) but when that human life has reached a point in its development that it is deserving of legal protection.  Unfortunately with its 1973 decision Roe v. Wade, the Supreme Court decided that this country was not entitled to have this debate. As a result,  no compromises were made, no public consensus about abortion law was reached.  We have all suffered from the Court's short-circuiting the democratic process from playing out.

P.S.  You will also notice on the graph above another interesting factor regarding polling on the abortion issue - that younger people often poll as more pro-life than older people.   Probably the reason for that is modern medical science, in particular the improvements in sonograms that let people see for themselves how human life actually develops in the womb.  The hope of liberals that the abortion issue will follow the same demographic path that same sex marriage has taken (i.e. older people who oppose dying off while younger people overwhelmingly support) is wishful thinking.
Posted by Paul K. Ogden at 10:34 AM

I've always relied on a pretty simple fact, if you have to stop a heart from beating on purpose, you are killing it. Not exactly rocket science.

I am a college degreed individual, Psych/Medical Soc, with much post-secondary education behind me and I can tell you from my human development courses that as science advances the argument for abortion and its intentional murder of life by intellectual charlatans like Ms. Kennedy becomes more and more difficult.

That is why those waging a war on babies HAVE to move the discussion to a males v female issue... which of course it is not.

A people that places no value on human life is in the crosshairs of its own destruction, seeded by the liberal extremists who just cannot see any truth that is at the tips of their noses.

Prenatal life is dependent on maternal life -- a fetus is not an independent entity. It's not a "human life" until it is born and takes its first breath. That's why we list birth dates on government certificates.

What is it about legislators that makes them think it's within their mandate "to control women’s bodies, to insert government into what should be personal and family decisions, and to make some people’s religious beliefs (no matter how uninformed, unscientific or unrepresentative) the law of the land".

Sheila Kennedy is right on this topic.

Abortion ALWAYS is a difficult decision, but it is one that should be one made by those involved -- not a priori by government (which has no legitimate role in such nuanced private decisions).

HITH'S argument is fallacious inasmuch as even AFTER the baby is born, s/he still must rely on mom & dad for survival (food, shelter). If dependence is the touchstone for ascertaining whether one person may kill another, then a large fraction of the population is in imminent danger!

What's more, DNA shows that the baby is indeed a unique person: as much as some may wish to categorize a baby in-utero as simply an extension of the mother, the baby has his/her own unique genetic makeup.