Can the Democrats Win the Indiana Governor's Race? The 2012 Election Results Suggest They Can

In light of the discussion over Governor Mike Pence possibly seeking a second term, I decided it was a good time to look back at the race he won in 2012.  In that contest , Republican Pence squared off against Democrat John Gregg, a former speaker of the Indiana House of Representatives.    Libertarian Rupert Boneham also had a strong third party performance in that election.  A review of the election results that year should give the Democrats a reason to be optimistic about winning the 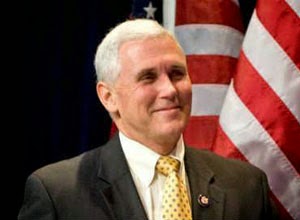 Governor's Office in 2016, regardless of whether Pence seeks re-election.

Pence's victory margin in that race was a mere 75,408 votes.   Gregg won Marion County by 80,618 votes.  There is no reason to think that the Democratic dominance of Marion County will be any less next time around and it is likely to be more. The Marion County GOP is a shell organization which in 2014 didn't bother to field a candidate in 8 of 15 Indiana house races or for Auditor.

I get the sense that the tea party wing of the Republican Party is none too thrilled with the Governor.  While Pence has backed away from conservatives on a number of issues (see for example his support of a pilot pre-K program and Indiana's - slightly - modified version of common core), Pence's new-found moderation is unlikely to attract Democratic-leaning votes.

During the remaining weeks of the 2012 campaign, Pence reminded me of a quarterback sitting on a big lead running out the clock, trying not to make any mistakes as his opponent slowly closed the gap. (The result on Election Day suggests that perception was accurate.)  Pence appears to be governing the same way, not taking bold and creative approaches to issues as his predecessor Governor Daniels chose to do.  While the Pence people point to favorable polls, those polls belie how shallow his support is even among conservatives who had strongly supported him in Congress.

The Democrats would be wise to nominate a moderate like Gregg again.  If that happens, Gregg needs to abandon the cornball Sandborn ads he ran early in his campaign and present himself as a serious, intelligent candidate who understands the issues.   In terms of where he can concentrate his efforts, Glenda Ritz's performance in the Superintendent's race that same year provides helpful hints on where Democrats can gain ground in Republican Indiana.

While there is little reason to be optimistic about the Democrats' ability to win statewide office in off-year elections, presidential elections are a different story.
Posted by Paul K. Ogden at 2:52 PM