Many homeowners on the west side of Indianapolis this week received a slick mail piece saying that Democratic Rep. Karlee Macer's "opponent" has a lengthy criminal record and is currently in jail.  Once side of the mailing featured a closeup of a person in handcuffs with the reverse side showing his criminal history.  Only if you look at the fine print on the criminal history do you see that the person's name is John Crouch.  But Crouch is the INDEPENDENT in the race, not the Republican, Bradford Moulton.  Of course, none of this information is included on the mailing. 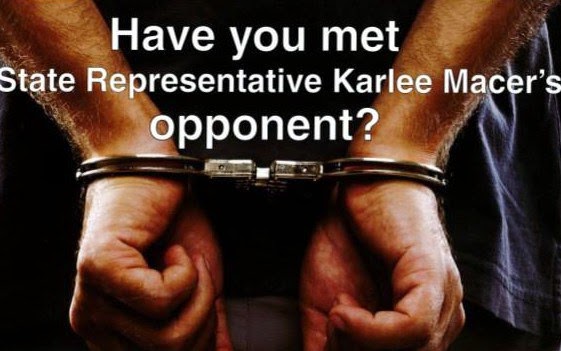 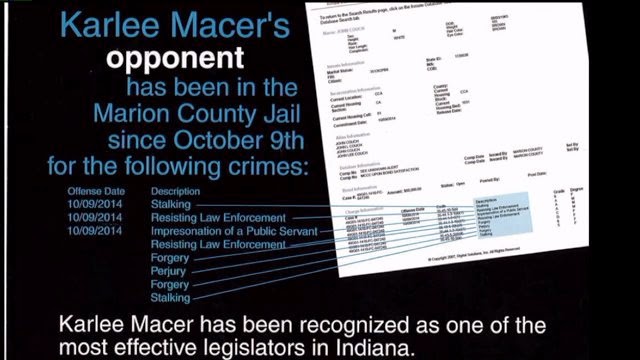 Believe it or not, there are a few ethical lines you don't cross in politics and this mailing, sent by Marion County Democratic Chairman Joel Miller managed to cross one of them.  Voters recoil at this type of stuff and when it came out, as it definitely would, that Miller was trying to trick voters into believing that Crouch criminal record (which includes allegations of stalking Macer) actually belonged to Moulton, there will be even a stronger backlash against Macer.

Macer has said that she didn't know about the mailer until after it had been sent. The public won't believe that for a second, but as a former candidate, I can affirm that that may well be true.  When I ran for the House on the northwest side of Indianapolis in 2000, polling showed I was running dead even with first term incumbent Jeb Bardon.  (Bardon later moved to another district.)  The state party got involved and started sending out negative mailings slamming Bardon, including one particularly offensive slick mail piece that depicted a man lurking outside of playground which said Bardon supported child molesting because of something contained in the pages of the budget bill the representative had supported.

The state party never told me in advance what mailings they were doing.  When I saw the child molesting mailing and when I learned about it I strenuously objected to what they had done. The fact is very often parties and political organizations send out these negative mailings intentionally not telling candidates so they can disassociate themselves with the negative attack.

I watched Indiana Week in Review expecting a spirited review of the mailings.  Instead I was treated to a bland discussion that suggested the mailing was not that big of a deal.  But it is a big deal, a huge deal in fact..  The panelists seemed to completely miss the fact that the mailing will hurt Macer terribly in that race and I think quite likely will cost her that district.  Only Democrat Ann Delaney hinted at that when she said she wouldn't have done the mailing.  Of course, Jim Shella failed to follow up to ask her why.  The reason why is that the mailing won't work, it will turn voters against Macer who will be perceived as having sent, or at least authorized, the piece

Originally, I thought Miller just made a dumb mistake with the mailing.  But what if Miller knew the mailing would hurt Macer and that is exactly what he intended?   It has been suggested to me by a Democratic activist in that district that Macer is not Macer's favorite and, that since the Democrats are already in the minority in the House and have little power, giving Macer's seat to the Republicans in the 2014 election would allow Miller to be rid of Macer.  Then in 2016, when the numbers better favor Democrats due to higher turnout in the district, Miller could install a Democrat more to his liking.
One thing that gives credence to this theory is that usually it is the state parties sending out mailings for state representative candidates in targeted districts, not the Marion County political parties which are typically strapped for cash.  I find it very odd that the county organization sent the mailing.

Whether it was a boneheaded move by Miller, or Miller was intentionally sabotaging her, Macer deserved better.
Posted by Paul K. Ogden at 2:38 PM

How convenient. I did not know. Maybe it is time for her to go to the powder room and get herself together.

It is unfortunate that our Campaign Finance System pours so much money into the system. It seems to me at least the vast majority of this money goes into attack ads of one form or another sponsored by a candidate, party or some dark money source.

I understand the difficulty of communicating a complex issues in a 30 second TV Commercial or a slick mailer.

Communication is reduced even if you have the money to bogus, meaningless slogans: Hope and Change, Hoosier Values, Family Values, Death Panels, etc.