Political Candidates Deserve Praise for Climbing into the Arena; Public Does Not Know the Sacrifices Involved in Being a Candidate

“It is not the critic who counts; not the man who points out how the strong man stumbles, or where the doer of deeds could have done them better. The credit belongs to the man who is actually in the arena, whose face is marred by dust and sweat and blood; who strives valiantly; who errs, who comes short again and again, because there is no effort without error and shortcoming; but who does actually strive to do the deeds; who knows great enthusiasms, the great devotions; who spends himself in a worthy cause; who at the best knows in the end the triumph of high achievement, and who at the worst, if he fails, at least fails while daring greatly, so that his place shall never be with those cold and timid souls who neither know victory nor defeat.”  --Teddy Roosevelt

Teddy Roosevelt could well have been talking about political candidates.  As a former candidate myself, I so admire people who are willing to climb into the arena and run for office.  Until people have been a candidate, they have no concept of the the extraordinary amount of personal and financial sacrifices that go along with running for office.  Many of these candidates, particularly in competitive races, put their jobs and family on hold for months in order to attend events and knock on doors. 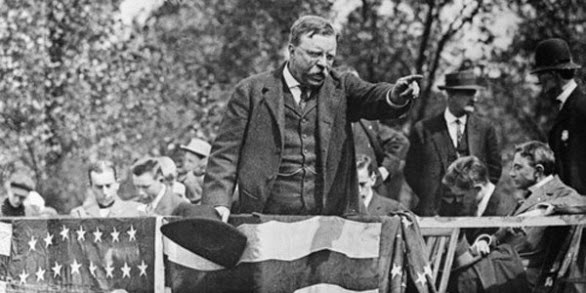 Whether it is a David Stockdale or JD Minear running for Congress, a Mark Brown running for Sheriff or David Hennessy running for Marion County Superior Court judge, these people should all be applauded for stepping into the arena, putting their name on the line, making the sacrifices associated with being a candidate.  While these candidates were long-shots, their presence on the ballot was so important because they gives the voters a choice.

Yet does the public ever thank these candidates for putting their name on the line, for making the sacrifices associated with being a candidate?  On rare occasions people do, but for the most part they'd rather stay on the sidelines criticizing the candidates.

My most recent observation in that regard has to do with candidate yard signs.  First, comes a complaint by a non-candidate about yard signs being in the right-of-way.  Candidates shouldn't do that according to the critic, they should only be in people's yards. But the law with regard to political signs in rights-of-way for generations has been universally ignored in the 30 days leading up to the election.  Candidates of all political stripes from Governor to township board have placed signs in rights of way.  It is a way of communicating with voters.  Given that the two parties in Marion County have taken to barring non-slated candidates from obtaining critical voter information, unslated candidates often have no other way of getting out the fact they are candidates other than through yard signs. Nonetheless, both slated and non-slated candidates post signs in the right-of-way.

Here's a suggestion to the critics.  If a post-election, right-of-way yard sign is bothering you, instead of contacting the candidate and complaining, do the candidate a favor and take it down yourself.    Trust me, a losing candidate is not going to be upset if the yard sign is tossed in the trash; they will expect that.  Most of those signs that have been out in the weather can't be reused anyway.   Picking up the sign will be a nice "thank you" to the candidate for his or her willingness to make the sacrifices of being a candidate.

To close, I want to give a big "thank you" to those candidates, both successful and unsuccessful, Republicans and Democrats, who decided to climb into the arena and run in the primary this May.  Our political system could not survive were it not for the sacrifices that you and other candidates are willing to make.
Posted by Paul K. Ogden at 10:10 AM

The establishment fails significantly in this regard; to appreciate & strengthen the party through intra-party competition. Who, in their right mind, can be "offended" by fellow competitors in any race; impugn & dismiss the rights of others to participate or compete?

Failure to promote competition in favor of monopolistic & myopic "brand" building in service to principals over principles, is the unwitting leverage of a widening enthusiasm gap; recently measured in declining turnout or a 7-8% participation rate of those who once claimed to "identify" with what's condescendingly referred to as a "brand."

This notion of brand is destructive to the party's activist vitality, health or grassroots circulation & therefore viability. Blue blood is deoxygenated; the stuff of wobbly knees & blurred vision...

My empathy stops at the point where people ambitiously seek power to rule others.

I know the sacrifices those who are ruled make, in lives, money, and sacred honor.