Tim Evans of the Indianapolis Star has an excellent article on recent prostitution arrests in Indianapolis and how the focus has become not on the arrests, but rather seizing more than $300,000 from the women via civil forfeiture:


[Anzhelika] Rampone, the alleged madame who police say arranged trysts online using the name “Natasha Smirnoff,” is charged with promoting prostitution. The Class C felony charge carries a penalty of two to eight years in prison, plus a fine of up to $10,000.

[Veronika] LeBlanc is charged with prostitution. That is a Class A misdemeanor, which carries a maximum penalty of up to one year in jail and a $5,000 fine. 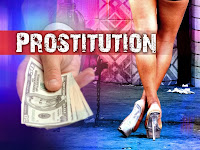 But the criminal charges may not be their biggest worry. That’s because the women are facing an even more ominous legal battle: a fight for more than $300,000 in cash and bank deposits police seized following their arrests.

In addition to the criminal charges, prosecutors have filed two forfeiture lawsuits: One seeks $156,000 from nine bank accounts belonging to LeBlanc and Rampone, the other targets $94,000 confiscated from Rampone and $49,000 plus more than a dozen pieces of jewelry, taken from LeBlanc.

The lawsuits contend the money came from criminal acts and that Rampone and LeBlanc “have participated in, and constructed to operate a corrupt enterprise, through a pattern of racketeering activity.”

Even though LeBlanc is alleged to only have been involved in a misdemeanor, which fine could not be more than $5,000, she stands ready to lose more than 20 times that in the civil forfeiture process.  In the civil forfeiture lawsuit there is a much lower burden of proof, defendants who can't afford attorneys are NOT provided with one, and the fact the defendant takes the 5th can be used against them. Very often defendants are not even provided with notice that there is a legal proceeding to freeze their bank accounts...they get the notice after the court has already ruled and it will be months if not years before the bank accounts are unfrozen.  (Given that many of them end up desperate to pay bills they often will settle for getting a portion of their cash back.)Then there is always the possibility, albeit enforced with a wink and a nod, that a civil forfeiture defendant will face a harsher criminal prosecution if they fight the civil forfeiture proceeding. Needless to say, most civil forfeiture defendants simply walk away from their property.

Here is another thing.  Criminal charges do not even have to be filed for civil forfeiture to be pursued.  All the prosecutor's office has to do is allege that property and money seized was gained through criminal activity and then the defendant has to start climbing an enormous legal mountain to get that property and money back.

What is really outrageous is that more and more of these prostitution busts seemed aimed at targeting foreign nationals, women who often can't speak English well and who will be the most intimidated by begin dragged through the American legal system.  (Chinese spa/massage parlors are a particular favorite.)  Very often public officials will announce that the bust was done in order to look for "human trafficking," which bust may well be financed with federal funds they have received for those purposes. Of course, local officials never actually find any human trafficking.   It's what we lawyers call a "pretext."

My friends on the left like to think that the Marion County Prosecutor's Office is a much more ethical place since Democrat Terry Curry arrived.  But, in fact, Curry has been horrible for civil liberties. While Carl Brizzi confined civil forfeiture almost exclusively to drug offenses and to people who actually being charged, Curry uses it for every criminal offense he possibly can and doesn't care if there is enough evidence to actually charge the person with a crime.  Curry has turned Marion County law enforcement into a strong-arm force focused not on preventing crime, but on obtaining as much cash and proceeds as possible.  Like Brizzi, Curry refuses to follow the law and turn money over to the Common School Fund.  It would appear from the Evans' article that Curry has embarked on a new tactic one that I recall the Howard County prosecutor using - instead of using the regular civil forfeiture statute, using the separate racketeering civil forfeiture statute, apparently even when there is no racketeering.  The racketeering  forfeiture statute strangely does not specify that the money above the law enforcement costs has to go to the Common School Fund. Of course that statute also doesn't say law enforcement gets to keep any of the civil forfeiture proceeds either - it is silent on the distribution of the money.  But let's not quibble with details.

What I find ironic is that officials at the Marion County Prosecutor's Office, people who prosecute people for alleged violation of the law, have no problem whatsoever blatantly breaking the law themselves.
Posted by Paul K. Ogden at 10:18 AM

With Ballard limiting his budget Curry has turned to a real easy way to get some cash. Curry is no dummy!
Why not feed on some foreigners no one really cares about.

While I agree with the premise that criminals should not profit from their crimes, I have multiple problems with civil forfeiture.

1) there is no burden of proof showing that the money actually came from a criminal act
2) that the government has set themselves up to benefit from these crimes
3) that in this case, it is an agreement that affects no one other than the buyer and the seller,most likely adults.

Indy Rob, actually its law enforcement, who has the ability to bring these actions, which profit by these actions. And that is the problem. If they were forced to follow the law and could only keep enough money to cover the cost of the law enforcement action, you wouldn't see the abuse you see today.

His policies are extremely disappointing as they are of a cloth with Brizzi's.

The federal government didn't even use its civil forfeiture law to seize Tim Durham's assets, not to mention the fact that there were real victims. Who's the victim in a consensual arrangement like these women had with their patrons?

Forfeiture is appropriate when the money is used to compensate victims of violence or fraud. Who are the victims in these prostitution cases?

I think for anyone to compare Curry to Brizzi is a major stretch. No one questions the ethics or behaviors of Curry. You may disagree with his policy but he is fair minded, a gentleman and anxious to prosecute criminals.