It may come as a surprise to Hoosiers that Indiana University trustees and administrators are considering emptying and renaming Ernie Pyle Hall on the Bloomington campus as they merge the IU School of Journalism into a larger college. This change would diminish the journalism program and leave the World War II journalist from Dana, Ind., without major memorial or tribute on the IUB campus. It’s almost unfathomable, but it’s about to 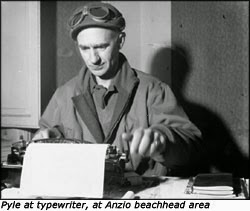 happen, and the kickoff may be on Oct. 17 and 18 at the IU trustees’ meeting.

Changes at IU and this odd apathy regarding Pyle’s legacy come because of fearful campus chatter about the new age of journalism. Poorly informed musings from IU administrators about the future of journalism have convinced officials that change for the sake of change must be made.

The general plan is to merge the IU School of Journalism, one of the best journalism schools in the nation, with other IUB communication schools and programs (including, believe it or not, a screenwriting program), to be tucked within the College of Arts and Sciences. This new media school could be moved into the larger Franklin Hall in mid-2014.

The result will be a blow to the independent School of Journalism, and one likely to drive the best young minds to IU’s competitors — top journalism schools at Northwestern University and the University of Missouri, for example.

It will also leave Pyle without a home on the Bloomington campus. Ernie Pyle and even the School of Journalism are seen by some IU officials as dusty relics from a time when journalists used typewriters.

Consider what IU President Michael A. McRobbie told the Bloomington Herald-Times in July 2012: “There’s no point in saving a school that trains people to manage fleets of horses if the motorcar has taken over horse-drawn transportation.”

It is bad enough that IU officials seem more than willing to reduce to second tier status one of the best journalism schools in the country.  It is even worse that IU officials are so uninterested in preserving the legacy of a true journalism hero in IU's Ernie Pyle, who was editor of the student paper while attending the school.  My guess is IU officials would rather the building be named after someone who gives the university a big pile of cash.  It's very sad that that is too often the values of today's academic leaders.
Posted by Paul K. Ogden at 9:21 AM

In the era of "free speech zones" (actually, really restrictive limits on speech outside of a small area). corporate for hire media that is nothing more than PR for hire, the idea that any disruptive form of speech can be quantified and outlawed, general belief in the philosophy that the government monitors all communications to protect us, we need journalists and schools of journalism that teach actual reporting of current events, instead of just working as PR flacks promoting one agenda or the other. Ernie Pyle reported the events that he saw, not the story that the military brass wanted.
It would be a major error for IU and McRobbie to diminish the importance of IU's journalism program. This decision should not be based on dollars and cents, but one that is based on the overall impact of journalists on society and civilization.

Whether reorganization is a good idea depends on where you sit.

The program at Pyle Hall has a tradition for excellence in journalism. It would be a shame to lose it.

On the other hand, the journalism, creative writing and theater programs at IUPUI are deficient. A statewide IU School of Communication would spur development at the regional campuses. Indianapolis, Fort Wayne and Gary have a greater need for journalists than little Bloomington has.