Many of my friends on the right are fighting for amendment to the Indiana Constitution to enshrine the current statutory prohibition into the state constitution.  In Indiana, a constitutional amendment has to pass two separately elected legislatures before it can be considered by the voters.  The amendment passed during the 2011 General Assembly and will be considered during the 2014 short legislative session.  There has been a sea change in political opinion since 2011. Although the legislature is dominated by Republicans, it is not a given that it will the General Assembly in 2014.  Even if it passes the proposed constitutional amendment may well fail to be ratified by the voters in 2016. 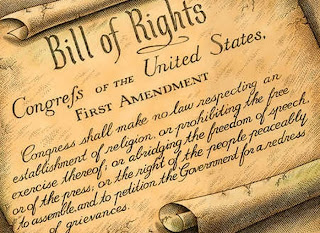 Regardless of what happens short term, the generational shift in the polls on this issue leaves no doubt that long-term those on the right who oppose same sex marriage are going to lose.  There will be a time, a time in the not too distant future, when a majority of state legislatures will permit same sex marriage.  Indiana will eventually join them. Advocates have successfully cast the issue as one involving civil rights.  It is tough to argue that two people who love each other shouldn't have the right to get married.  We on the right who praise the importance of marriage and family should encourage people who want to enter into monogamous, committed relationships, to do so.

There is though another fight though coming down the road where those on the right are likely to be much more successful.  It involves religious freedom and the right to exercise one's beliefs.  Many religious faiths hold as basic tenets of their faith that homosexuality is a sin.   No matter how wrong people think that belief is, the federal and Indiana constitutions protects the right not only of the people to have those religious views but to exercise those beliefs in their daily lives.

It is inevitable that the coming right of same sex marriage clashes with the rights of people to exercise their religious beliefs.  Indeed that happened in New Mexico.  In that state, a Christian couple which owned Elane Photography refused to photograph a same sex marriage. The New Mexico Supreme Court upheld a finding that they were in violation of New Mexico's human rights ordinance prohibiting discrimination based on sexual orientation.  That photography studio recently closed its doors.

In the state of Washington a florist, who refused to work a same sex marriage because of religious objections, has been targeted by the state's attorney general on a charge of unlawful discrimination.

Even many hard core supporters of the same sex marriage amendment do not believe that a photographer or florist should be forced by law to work a same sex marriage in violation of their religious beliefs.   Others try to draw a line between activities that require direct participation (such as the photographer or florist) and a restaurant or a hotel that might refuse to serve or provide a room to a same sex couple.  I am not certain how to characterize it, but I think there is a valid distinction between the two.

I know that as an attorney I would not like to be required to defend an abhorrent individual like late term abortionist Kermit Gosnell.  We attorneys assume that we have the right to turn away clients whose conduct we find morally repugnant. But should we attorneys be different from other service providers?  If our motive for turning down a client is our religious or moral beliefs, should that be allowed?

If discrimination against same sex couples in marriage is bad, then it should also be bad to discriminate against people because of their religious beliefs.

Instead of fighting same sex marriage, I would like to see Indiana legislators instead focus on a "freedom of conscience" bill to protect service providers. While the state and federal constitution should provide protection for religious freedoms, it is apparent that many courts are giving the constitutional protection for religious liberties short shrift when those liberties conflict with the new rights of same sex couples to marry.  Legislatures can fix that imbalance by passing a law that protect and individual's freedom of conscience.

The state of Washington is fighting that battle now.  According to the on-line Olympia Report:


A year ago, when lawmakers in Olympia were debating Washington’s same-sex marriage law, supporters of the bill defeated numerous amendments that would have protected the rights of private business owners — such as caterers and photographers — to decline service based on their religious convictions.

But when a Richland florist last month put the question to the test, she found herself in hot water with the state Attorney General’s Office, which accused her of violating anti-discrimination laws.

Senate Bill 5297, sponsored by Kennewick Republican Sen. Sharon Brown and co-sponsored by 10 other GOP members, would protect the “right of an individual or entity to deny services” if providing those services is contrary to their “sincerely held religious beliefs, philosophical beliefs or matters of conscience.”

Here's a crazy idea...what if those on the right pushing the anti-same sex marriage amendment dropped that idea to work with opponents on crafting a piece of legislation that protects the religious freedoms of those who are morally opposed to same sex marriage?   Compromise.  I know it's a dirty word.
Posted by Paul K. Ogden at 10:42 AM

all hear this said...

As a gay man who is weeks away from moving out of Indiana, in part to relocate somewhere where my private preferences won't be such an issue in the business community (business out here is disproportionately affected by the local political regime, and the regime *claims* to be "christian" and "conservative")I couldn't agree with you more Paul. The bakery case is one that I've been watching, and it leaves me scratching my noggin. I believe something similar occurred with one of the bakeries located here in Market square. Personally, if you don't want my business, I certainly don't want to support your business, and it would be my pleasure to help put you out of business the old-fashioned way; by word of mouth and an organized boycott.Suing a private business owner over something like this is a violation of their freedoms. Let them be free to discriminate, and free to be discriminated against. Why make a lawyer richer by getting the courts involved?
As far as what's being proposed in the legislature, it's a joke, but ultimately it's a fair warning to any young gay professionals to keep away from Indiana; there are worthier places to share your talents. If only the legislature could understand how much of a joke they are making of themselves by doing this -that they don't simply compounds the idiocy of it all. Paul I'm sorry there aren't more people like you in this state; it would be a better place for a number of people to live (and let live) if that was the case. Hoosiers, as a group you have some great qualities but tolerance and civility are not among them.

By the same logic, one could allow restaurants to not serve customers based on their race. Right?