Jon Murray of the Indianapolis Star, pens an article this morning on our favorite sport here at Ogden on Politics, cricket:


Indianapolis will host a revived U.S. amateur cricket tournament and championship beginning next year at a Far-Eastside complex that the city is developing into a world sports venue. 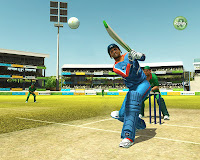 City officials and the United States of America Cricket Association announced Friday that they have struck a three-year deal, through 2016, for an annual four-day tournament. The kickoff in late August 2014 will involve eight regional teams, each culling the 14 or so best players from amateur leagues within its boundaries.

....Mayor Greg Ballard and the Indiana Sports Corp. have pushed hard to win hosting rights. Ballard has taken criticism from some for spending $6 million to expand Post Road Community Park into a nearly 50-acre complex that will have five multi-use fields accommodating international sports, including cricket, lacrosse, Australian-rules football, Gaelic football, rugby and hurling. Its configuration can accommodate an overlay of two giant cricket fields.

USACA has been criticized by officials in Broward County, Fla., for not doing enough to help attract more cricket matches in the last few years to the community’s $10 million stadium, which has permanent stands seating 5,000. That stadium is part of a larger $70 million regional park, and it hosted the last national cricket tournament three years ago.

A recent IBJ article took note of Republican councilor Christine Scales criticism of the the sport's governing body and the priorities of the city as reflected in the cricket plans: 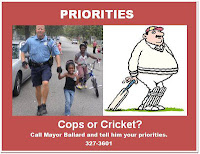 “If we’re dependent on them, I’m worried,” said Republican City-County Councilor Christine Scales, a caucus renegade who co-sponsored with Democratic Majority Leader Vernon Brown a proposal to use $6 million from the Rebuild Indy fund to hire a new class of police recruits.

Scales said she expects Ballard to veto the proposal, but she signed on as a co-sponsor to make a point about the administration’s spending priorities....

The IBJ article unfortunately did not mention the work of Democratic Councilor Zach Adamson in smartly crafting an amendment that has now placed the mayor in the position of having to veto a bill to spend $6 million from the Rebuild Indy money on a police recruitment class which matches the $6 million the Mayor is spending from the Rebuild Indy money on cricket.   The point Adamson is making is that the Mayor has misplaced priorities, a point that is very difficult to dispute and will be a great campaign issue for the Democrats in 2015 should Ballard run for re-election.
Posted by Paul K. Ogden at 9:41 AM

Rebuild Indy Money for a Cricket. How about spending some of that money Mr. Mayor to resurface North Michigan Road. The patch jobs last until the first rain. At least you could use some rebuild money to repaint lane markers on Michigan Road.

I checked the Indiana Sports Corp Officers, not one African American.

At least the Cricket stadium won't be a lifetime of lush salaries, lavish perks, incredible benefits, taxpayer-paid cars and gasoline and luxuriously bountiful pension plans paid for by those who will never have a life so good.

At least a Cricket stadium won't mow down the citizenry with high-speed chases, kill them with drunk driving and largely perform "jobs" that leave the community worse for the effort.

If the Cricket stadium comes at the expense of police, find me a bat.

Flogger - ISC and IHSAA are essentially caucasian institutions. Glad someone else noticed !

Cato - while I agree with you regarding police pay and behavior, the center city is a grossly unsafe place to live. "More cops" is one part of the answer. (At least a police department is a legitimate function of government, unlike sports.) Assuming your choice of the name Cato denotes Libertarian leanings, then we would both agree that ending the 'war on drugs' would greatly reduce crime, far more than adding cops. Most violent crime is the product of the drug trade.

From the Star article: "The city and USACA have agreed preliminarily to share costs and revenue from tickets purchased by potentially thousands of spectators; terms have not been disclosed yet."

In other words we are on the hook for the tournament costs as well as the facility, probably recouping the investment only if the tournament makes money. Lucky us.

The Republicans are great at giving away money. They just give it to people that don't really need it.