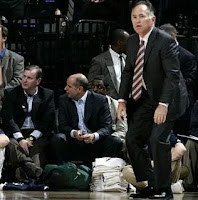 Since 2008 Mayor Ballard has received nearly a million dollars in free sports tickets.  Shouldn’t he have to report somewhere that he received those tickets as well as their value?

He accepts free memberships at Highland and Woodstock Country Clubs worth somewhere between $5000 and $7,000 a year each.  He does admit to the memberships on an informal addendum to his Economic Interest filing but without any dollar value.

Mayor Ballard has gone on multiple foreign trips that in aggregate have cost hundreds of thousands of dollars and have been funded by a secretive group of private donors that most likely includes individuals and organizations with business ties to the City.   These gifts appear nowhere on his filing.

City-County Council President Maggie Lewis is the Council’s appointment to the Capital Improvements Board.  As such she receives $11,000 a year in free Colts tickets in the CIB’s Suite at Lucas Oil.  She also has access to free Pacer tickets and free tickets to any event at Banker’s Life including concerts as well as performances like Disney on Ice, Taylor Swift, Paul McCartney and Cirque du Soleil.  Nowhere on her economic interest filings are these gifts divulged.

As a member of the CIB Ms. Lewis votes on tax increases, budget proposals and Pacer bailouts.  She is then expected to keep an open mind on these very issues when they later come before the Council.  How is this not a conflict?

Ms. Lewis is the Executive Director of Dove House, a social service provider to previously incarcerated women dealing with addiction issues.  In the past four years Dove House has received over $400,000 in grants from the City.  Inasmuch as a significant portion of Dove House’s funding comes from the City, the level of Ms. Lewis’ salary is somewhat dependent on the City’s grant.

I don’t doubt that Dove House does good work.  But presiding over the City’s fiscal body while a recipient of a City grant does compromise Ms. Lewis’ independence.  None of this is reported on her Economic Interest filing.

Is it any wonder she agreed so quickly to the Mayor’s $30 million budget cuts?  Checks and balances have come to mean the Mayor writes the checks and the Council balances the ball on their collective nose like the trained seals they have become.

Mayor Ballard can with the stroke of his pen enrich law firms, developers, architects and consulting engineers.

Council President Lewis names committee chairpersons who serve at her pleasure.  She assigns proposed ordinances to committees of her choice.  She sets the agenda.  A mere recusal when relevant votes come up does not cure the conflict.

What are the gifts? What is their value? Who are the donors? Is it so hard?

Famous superior quality comes along first of all, which is certainly equally the essential and additionally imperative make certain now for the huge the past for the cartier replica watches model trademark. Maybe there is a fabulous way to rescue a lot of dough upon your most popular novels and also keep these things without charge. Link up with a fabulous booklet organization. You've gotten the opportunity to request replica chanel about whatever variety, right from biographies to make sure you knowledge fictional works to make sure you your child's to make sure you devotion to make sure you sense of mystery to make sure you hallucination to make sure you self-help. Wedding reception become bestsellers regarding the things you had pay for within the fake rolex watches. Whatever bookworm could quite possibly experience the final savings and additionally options this really is paid for just by organization burberry replica. Paid members are actually emailed a fabulous booklet or set in place each month. You’re able to whether consider individuals your body or possibly all the irons his or her self consider individuals for your needs. You will have the choice to come back all the replica chanel 2.55 bags, for situations all the organization decides for your needs.