For now years, city officials have peddled the nonsense that the Broad Ripple Parking Garage, that monstrosity located at the southwest corner of College Avenue and Broad Ripple Avenue carries a price tag of $15 million.  Lately some stories have even suggested the cost was as much as $16.5 million. 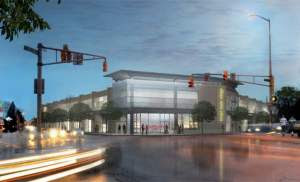 I have long said that number is fiction.  People may not remember it but early on a media outlet (I believe the Indianapolis Star) priced out similar sized parking facilities and found out that they do not cost $15 million but rather in the $5 to $7 million range.

Why is this important?  Under the contract entered into by the City with Keystone Construction and its partners, essentially the first $6.35 million of the project comes from the public.  By saying the 342 space parking garage costs $15 million, it can be claimed that Keystone, the developer, is paying for most of the cost of the garage, for which Keystone and its allies gets 100% of the parking revenue, 100% of the commercial rents and 100% ownership.  We, the public, get zip.

Undoubtedly, there was a calculation that media outlets would simply report the $15 million cost without demanding proof.  And that calculation has been right.

The Muncie Star-Press reports that the City of Muncie is building a six floor parking garage with 342 spaces next to the Ball State University campus.  The cost?  $5 million.
Posted by Paul K. Ogden at 8:12 AM

Ballard stole $6M from the taxpayers and gave it to a friend. In any other activity, this crime would long ago have landed Ballard in jail.

Who owned the land? Who bought the land? How much did they pay?

Indiana University put out bids for the new six level, 1,300 space parking garage that was built across from NIFS. The bids ranged from $13M to $18.7M. IU awarded a $14.3M contract and the garage was built. So for just over what IU paid, the city only gets a two or three story garage, likely a bit more fancy, but almost 1,000 less parking spaces? The IU Trustees placed the bids for their garage in full view of the public in their meeting minutes. Can anyone find out where contractors were invited to bid on this project for the city, and what these bids were? There has to be some justification for such an overpayment. Can the retail space finishing out really end up costing additional millions?

Such a big money, such a wonderful place. Want to be owner of that sum of money

It very very sad story as for me. And situation too. www.the-essays.com

I want to say that this content is really interesting! Thanks for posting!

The post is really great! It can help to write my essay! Thank you!