Little is known about the appointment and composition of the Indiana State Board of Education.  Yet the members play an important role in shaping education policy for the State of Indiana. That was most evident recently with the debate over the Common Core.  There is on the State Board of Education unanimous support for the implantation of Common Core.  It was recently reported that the Board members were expressing "frustration" with "meddling" by the Indiana General Assembly in the implementation of Common Core.  But things may well soon change on the Board.  Governor Mike Pence is on the precipice of being able to appoint a majority of the Board and thus change the direction of education in Indiana.

First some background of the State Board of Education.  Under Indiana law the State Board of Education consists of 11 members.  The chair of the Board is the elected Superintendent of Public Instruction. The other 10 members of the board are gubernatorial appointees serving staggered, four year terms.  Nine of the appointees are to come from the nine congressional districts while the final one is at-large.  Four have to be actively employed in schools and have an valid teaching license. 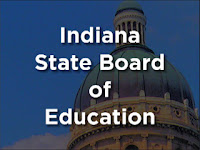 O'Brien, Pettibone and Elsener appear to be three of the four individuals employed with the requisite educational background.  Thus three of Governor Pence's six appointments would have to have a background in education that includes a teaching license.

Governor Pence could of course reappoint members to an additional four year term.  That's what Governor Daniels did with Blacketor, Pettibone, Elsener, and Edwards who all were originally appointed in 2005 by Daniels.

The Board's handling of the Common Core dispute strongly suggests at the very least the need for more diversity of thought on the board.  Personally I think Indianapolis' Andrea Neal, who has an education background and has penned excellent articles on education, including one criticizing Common Core, would be an excellent appointment to the State Board of Education.

It will be interesting to see whether Governor Pence looks to proceed with the status quo by reappointment of existing board members or whether he chooses to shake up things by putting his own appointees on the Board.
Posted by Paul K. Ogden at 12:25 PM