Want to buy a cold beer in Indiana?

Walk into a bar, restaurant or package liquor store and you can readily find a frosty brew to take home and quench your thirst. But head to a grocery store, gas station convenience store or pharmacy, and you’ll be taking home warm brews. 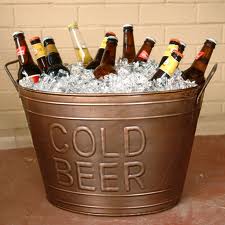 Convenience store owners say that just doesn’t make sense — and beyond that, they don’t think the state’s law is constitutional. For years, they have fruitlessly tried to persuade lawmakers to overturn the statute that limits who can sell carry-out cold beer.

Now, the Indiana Petroleum Marketers and Convenience Store Association, several store owners and a customer are suing Indiana in federal court to overturn what they are calling an outdated, antiquated and irrational state law.

“There is no logic in the current law that gives one class of retailer an exclusive right over another,” said Scot Imus, the association’s executive director.

Indiana has a hodgepodge of strict liquor laws passed in the 80 years since Prohibition ended, passed amid evolving religious, social and economic concerns. Now, Indiana is the only state that restricts the sale of cold beer.

Hoosiers also face the broadest restrictions in the country on the sale of beer, wine and hard liquor on Sundays. Only breweries, wineries, restaurants and bars are allowed to sell carry-out alcohol on Sundays. Efforts to overturn those restrictions failed yet again in the past legislative session.

The powerful package liquor lobby says the stores it represents would go out of business if the restrictions were overturned. Religious groups argue against increased consumption. Social organizations such as Mental Health America of Indiana say loosening restrictions would lead to more underage drinking and drunken driving.

In support of their claim, attorney John R. Maley points to a similar case last year in which a Kentucky federal judge ruled that prohibiting liquor and wine sales in grocery stores, gas stations and convenience stores violated the Equal Protection Clause of the U.S. Constitution.

The article goes on to quotes David Orentlicher, a former legislator and law professor at the Indiana University School of Law at Indianapolis, who said he expects the ruling to be overturned on appeal due to the very low standard - rational basis - states need to use their police powers to make these sorts of distinctions under the Equal Protection Clause.   Orentlicher is correct about the legal hurdle being high in this case.

As others have pointed out though, liquor stores, which benefit of course from Indiana's restrictions on the sale of cold beer, also face restrictions of their own in terms of the food products that they can sell.  Would these plaintiffs complaining about not being able to sell cold beer, be okay with allowing liquor stores to sell candy bars, soft drinks, chips and other products that have even large profit margins?

Of course, that's a discussion about what is good policy.  Just because a law is bad doesn't make it unconstitutional.
Posted by Paul K. Ogden at 10:26 AM

A state that won't allow a store like Party Source to exist is evil in nature. What other reason could explain it?

Purchases are separated into goods and services. Then there are goods that cost more because of the additional service going towards the final product.
Let's take a look at four grocery delivery items that would fall into this category.