Ryan Sabalow of the Indianapolis Star this morning has a nice article questioning the police methods involved in the prostitution busts of Chinese immigrants at northside massage parlors.  Here's a taste of the excellent lengthy article:


About 1 p.m. on Dec. 19, a man walked into the Dove Spa, a massage parlor in a nondescript Carmel commercial strip, and asked for the services of one of the women working there. 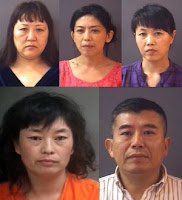 What the woman didn’t know was the man was an undercover police officer, wearing a wire. And what the woman did next, detectives now allege, was illegal: In exchange for $100 plus a $35 tip, she fondled the officer’s genitals.

Four more times the officer went back, according to a probable-cause affidavit released this week. During that time, over five months, the officer also visited a massage parlor in Zionsville. And each time, he allowed the women — all Chinese immigrants — to fondle him in exchange for cash, all in a fight against prostitution and human trafficking.

But the methods police say were needed to shut down a sophisticated prostitution ring were criticized Thursday by legal and law-enforcement experts and women’s advocates as excessive, unnecessary and misapplied to an investigation that involved possible human trafficking.

A good place to stop and examine.  No doubt it is excessive for 30 police officers to be involved in raiding two massage parlors.  But one thing the writer missed in an otherwise excellent article questioning the tactics is the money angle.  The "human trafficking" claim is always bandied about when these busts of massage parlors run by immigrants, particularly those of Chinese descent.  But it is rarely part of the charge.  Almost always it is simply old fashioned prostitution going  In this case most of the women allegedly prostituting themselves are in their 40s, not the type of subjects for a human slavery ring.

So why make a claim of "human trafficking?"  Follow the money.  The federal government provides 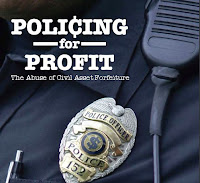 grants to state and local government (and sometimes nonprofits), to combat human trafficking.  This is money to pay police officers and buy equipment that doesn't come out of their local budget.   So what if the busts don't actually reveal any "human trafficking" going on.   It's not like they have to pay the money back.

It wouldn't be surprising to find out that the local officials received a federal grant to conduct the sting.  In 2011, the Denver Police Department received $300,000 from the United States Justice Department to combat human trafficking..  In September of 2012, the Ohio Attorney General's Office, and, strangely, the Salvation Army in Central Ohio, received a $700,000 grant for human trafficking work.

But that is not where the money bounty ends.  In the Hamilton/Boone County busts law enforcement officials walked away with $250,000 cash, including money seized from bank accounts (which undoubtedly was done before a hearing was even held.)  As the article states:


The nearly $250,000 seized in the case may go back into the budget of the drug task force that conducted the nine-month sting.

A drug task force conducted the sting?   Yep.  The Hamilton and Boone County Drug Task Force led the investigation and the raids.  Yet it apparently had nothing to do with drugs, just massage parlors about the sex.

So let me simplify.  So a drug task force needing money for its operations targets two businesses, run by immigrants, which businesses have nothing to do with drugs but which can provide the task force with a pile of cash for its operations.  Which is the bigger crime, the allegation of prostitution or the a government agency shaking down a bunch of immigrants for cash?
Posted by Paul K. Ogden at 8:44 AM

It's funny how the people who claim to be fighting human trafficking in this city and state were always present, along with off-duty police officers being paid to provide security, for the big bashes thrown at Tim Durham's mansion where sex for hire professionals were in abundance.

It is important to note that only one of the standards implementations must be open source, but not all of them.
cheap nfl jerseys|nfl jerseys free shipping

Sex First, Then Arrest Hooker? Don't Cops Have Better Things to Do?

There is a conspicuous absence of attorneys willing to help right this wrong.