As the Indiana General Assembly brings its act to a close, it is interesting to remember what dominated the early days - whether to pass a proposed constitutional amendment that defining marriage as being between a man and woman.  That proposal had already passed the General Assembly once before, but under our amendment process it has to pass a separately elected legislature a second time before going to the voters for ratification. Because of a pending Supreme Court decision which might affect the issue, the legislature decided to put the issue off until 2014. 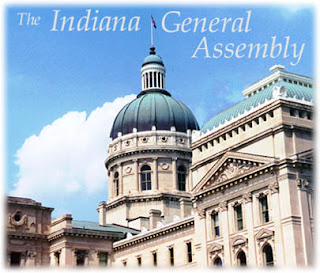 Same sex couples wanting the benefits of marriage figured that getting a hold on consideration of the amendment was the biggest victory they could hope for from the GOP-dominated legislature. But they were wrong.

Yesterday's budget agreement included an elimination of Indiana's inheritance tax.  In a previous post, I touched upon how extraordinarily complex and time-consuming the tax is to calculate.  But in my posting of some of the instructions about the tax, I failed to mention that it is an enormous and discriminatory tax on gay men and women who want to leave their estate to their partners.

Let's take a look at how the Indiana Inheritance Tax applies to two two situations.

Jack and Jill are married.  Jack passes away with $500,000 in assets he leaves for Jill in his will.  Under Indiana law, Jack's estate does not have to pay there is no tax owed as the surviving spouse is 100% exempt.

Bruce and John are gay men who are long-time partners. They would like to have gotten married, but are not permitted to in the State of Indiana.  Bruce passes away leaving $500,000 to John.  What is the inheritance tax on the bequest to John?

Some of my conservative friends point to the fact that private agreements can afford the benefits of marriage without there actually being a traditional marriage.  Sometimes, but not always.  In this case there is no way for Bruce and John to legally contract to avoid the tax.  It doesn't matter if the $500,000 passes via intestate (without a will), with a will, or by a trust.  The inheritance tax, which is a transfer tax, still has to be paid.

Those who support same sex marriage should celebrate this unexpected victory brought courtesy of the Republican-dominated General Assembly.

NOTE:  In the previous post, I tried to copy and past the state inheritance tax tables to give a hint on how confusing calculating the tax is.  Unfortunately, the formatting got stripped away which only made reading the complicated table even worse.   People can check out the Indiana Inheritance Tax instructions here.  Those instructions include the tables on page 3.
Posted by Paul K. Ogden at 11:20 AM

Zero gravity riddle: If a taxpayers marry themselves, why doesn't that qualify as a same sex marriage?

Just think how easy it would be for a government to indoctrinate all the school children if the writing, editing, and printing of textbooks is under a centralized authority and local schools and parents have no other options available. To see more info please visit essayswriters.org/college.