Today, the Indianapolis Star published a fourth story on the Curt Coonrod saga involving a younger woman.  Coonrod is a former Indianapolis City-County Council member and is a former Marion County auditor.  He has since left the public world and took a job in the private sector. 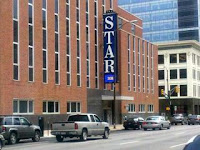 It seems that Curt, a single 58 year old, took a liking to a 21 year old woman he met on a dating website.  There relationship may or may not have been platonic, but at the least Curt viewed it as a friendship and endeavored to help the young lady.  Apparently the woman didn't appreciate Curt's help.  She plotted with her new 24 year old boyfriend, who she also found on line, to rob Coonrod while she pretended to also be a victim.  The police didn't buy it and they both have been arrested and charged with robbery.

Given Coonrod's status as a former public official, the story was certainly deserving of a mention.  But the Star didn't stop at a mention. It has now published four lengthy front page stories, with every aspect of the story and those involved detailed in print.

Certainly there are aspects of Coonrod's current career worthy of coverage.  Coonrod's role with the Carmel Redevelopment Commission and his advising Carmel Mayor Jim Brainard on finances are fair game.   Ironically though the Star is not interested in doing any story on Carmel that might put it in a negative light..  Instead they have chosen to use their front pages to report to provide salacious details on a private relationship that is nobody's business except those people involved.

Yes, a former Marion County Auditor and Councilor getting tied up and robbed is worth a mention.  But that's where the coverage should have ended.  There is no journalist merit behind running four lengthy front page stories exploring every detail and accusation relating to what happened.  It appears nothing more than a desperate attempt to highlight a juicy story to sell newspapers.

While the Indianapolis Star is enamored with the details of Coonrod's private life, state legislators five blocks away at the Indiana Statehouse are passing laws that will greatly affect people's lives.  A real newspaper would be reporting on those developments instead of the tawdry details of a purely private adult relationship.
Posted by Paul K. Ogden at 11:14 PM

If a tree falls in the woods, but no one is there to see it, & made into a newspaper that no one reads; was it really published?

The Star latches on to any opportunity to make a lot of noise about something that looks "official," so they can try to keep up the veneer that they are a public watchdog.

Of course, the Star's efforts are farcical. The Star only attacks safe targets and then makes far too much noise in the story in a feeble transparent effort to make it appear that they are doing some real reporting.

It would be fascinating... to learn the editorial staff's suggestions for late spring gardening...

They did a lengthy series on cheerleader tryouts. Yesterday they published a story about Hooters changing the appearance of its restaurant. They went to Atlanta to get that story.

Were cheerleader tryouts held to fill an editorial position?