A columnist uses her position at the State's largest newspaper to write (now) thirteen columns promoting mass transit since the transit bill was first introduced in the General Assembly.  The Star and other media outlets refuse to do any critical pieces on the mass transit proposal. 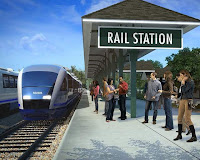 Meanwhile an (alleged) religious coalition tries to ambush a state senator who has reservations about the mass transit and publicly embarrass him into supporting the bill.  Some $2 million of our federal tax dollars is spent promoting the mass transit bill, including buying pro-mass transit advertising from media outlets.  Mayors throughout Central Indiana are united in support of the bill.  The proponents' news conferences and rallies in support of mass transit are tightly scripted and never-ending.

You got the sense near the end, and I think we are at the end with the Senate's vote to send the mass transit bill to summer study committee, that a backlash was forming against mass transit advocates who didn't care about the details of the plan, didn't care about the projected cost or likely overruns, didn't care if it was even a feasible plan given Indianapolis' lack of density, didn't care that the Fishers high speed rail was over half of the cost of the project with minimal benefit to Indianapolis residents.  Proponents did not want an honest debate on the merits of this mass transit plan. They were all about ending the debate and controlling their message.

Proponents not only were pushing a plan whose details they were unconcerned about, they were ready to turn over key decisions regarding mass transit as well as over $1 billion to an unelected, unaccountable board whose members are appointed by politicians.

What could go wrong with that?  Well, for that answer you don't have to look any further than the Capital Improvement Board, another unelected, unaccountable board with members appointed by politicians.  Just the other day, the CIB, in a 15 minute meeting, voted to give Jim Irsay the billionaire owner of the Colts $2 million to build two new suites in a stadium less than five years old. This comes after the CIB voted to give the Pacers' billionaire owner $43.5 million to operate Bankers Life Fieldhouse, a facility for which the Pacers get 100% of the revenue.  The CIB is not about doing what is in the best interests of the people of the City of Indianapolis. The CIB is about making insiders and the politically-connected wealthy.  It's not clear why proponents of the massive mass transit expansion think the transit board would be any different.
Posted by Paul K. Ogden at 11:20 PM

Go to a big bank or participating group of banks (with shareholder obligations) with a deficit projected notion like Crash Transit & see how much funding they offer... It's not that they don't have the money- it's accountability they have to shareholders!

Vampiric lobbyists & crony capped mis-representatives work a perverted template in attempt to elude SEC quality disclosure standards; their public funded fleecing schemes. These anglers are OPM (Other People's Money) addicts who can't get loans or subsidies from traditional sources where disclosure laws are expected to be uniformly applied; which does not exempt them from any such compliance.

I wondered if this was the case, that there was a backlash.

The scheme was designed brilliantly...it raised a ton of money for developers, yet had enough goodies for the left (state control of transportation, high-wage union jobs) that they bought in wholeheartedly. The influence of Saul Alinsky is thick, as shown in Ashley Kimmel's Nuvo article.

But like the IMS bailout, the economic impact statement for HB 1011 is vaporous. And unconstitutional, but that doesn't matter.

The biggest ongoing hoax on the general public is that the far left and big business are at odds.

"The biggest ongoing hoax on the general public is that the far left and big business are at odds."

You are absolutely correct.

"The biggest ongoing hoax on the general public is that the far left and big business are at odds."

And who are the main proponets of global warming, perhaps the far left.

This is very extra ordinary web blog.The postings in this blog are quite interesting and unique. Please add some more new posts in this blog. I am the frequent visitor to this blog.
bus to cameron highlands

Its a great pleasure reading your post.Its full of information I am looking for and I love to post a comment that “The content of your post is awesome” Great work.
driving in singapore

I taught your children for 34 years. I didn't make much money but I enjoyed my job. The way teachers are treated today, I would never go into education. And that failed education system that some of you critize every chance you get, produced the doctors, lawyers, judges, legislators, engineers, business men/women, carpenters, electricians, and plumbers that you depend upon. What thanks do teachers get for the good job they have done? To get more info please visit http://researchpapergiant.com/.