Saturday afternoon, after the Civil Discourse Show, I had the opportunity to drive nearly the length of Broad Ripple Avenue  (BRAVE) west to east almost all the way to Keystone, before doubling back to my eventual destination near 66th and College.   The traffic was worse than I ever remembered.  I sat through a few cycles of the lights before being able to move on part of BRAVE while on other parts I had to be careful not to run over pedestrians crossing the road.  It probably took me 15 minutes to make the two mile round trip. 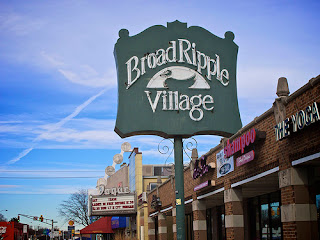 Congestion started to get much worse when the City eliminated two traffic lanes on the eastern part of BRAVE.  In its place, the City placed two bike lanes which are rarely used except occasionally by motorists trying to squeeze around other cars.  Supposedly this was  to have a "calming" effect on traffic.  I haven't seen any "calming" but I have seen frustrated motorists sitting in their cars which spew pollution into the air as they sit waiting for traffic to clear backed up intersections.  If planners think that eliminating two traffic lanes for bike lanes is somehow good for the environment, they're very mistaken.

The situation though is bound to get worse.  The Broad Ripple Parking Garage going up at the three way intersection of College Avenue, BRAVE, and Westfield Boulevard appears to be a monstrosity, a huge behemoth of a building blocking much of the view of the Village as one approaches from the west on Westfield Blvd.   In fact, it doesn't appear to be a parking garage at all.  It is a commercial building that has parking. Given the location, it is unlikely that people visiting the village will park at the location unless they are visiting one of the businesses in the building.

Now comes news that a new development is being approved just up the road on College, at the old Shell Station.  Kevin Kastner of Urban Indy has written extensively about the project.  While Kastner and those commenting generally praise the development, there doesn't seem to be any discussion of the effect on traffic.  The new development would be just north of the three way of the intersection of College Avenue, BRAVE, and Westfield Boulevard, one of the most congested intersections in the City.

My co-host of Civil Discourse, Mark Small, lives and works in Broad Ripple..  He praises it as a "progressive" part of the City.  Like many things Mark says, I have no idea what that means.  Personally, I used to like Broad Ripple and thought it would be a good place for a law office.  But the quaint, quiet village of the mid-1990s is long gone. The Broad Ripple of 2013 is a congested mess, a place to be avoided if possible.

Tuesday, October 25, 2011, The Tale of the Broad Ripple Parking Garage: Taxpayers Pay to Build the Facility While the Developer Gets 100% of the Ownership and Revenue

Tuesday, June 14, 2011, Taxpayers Pay to Build Broad Ripple Parking Garage; Garage and Revenue to Be Given Away
Posted by Paul K. Ogden at 9:18 AM

As the saying goes, you aren't stuck in traffic, you are traffic. As a pedestrian, the traffic doesn't slow me down much at all.

Anyway, Broad Ripple has been reduced to a pawn in the political and corporate welfare games played by the mayor. It's too bad and a loss for the city. These type of problems will undoubtedly only become worse now that the mayor will have so much more unchecked power.

I have lived in BR for 22 years, and the traffic is now impossible. I have had to find other routes to get out of the area. The absolute worse thing they have done recently is put in the bike lanes -that are never used. Anyone would be taking their lives in their hands riding on them.

Cnoone, a lot of people are dropping down south of Broad Ripple Avenue to residential streets with stop signs to bypass the congestion. I'm sure the residents, justifiably so, don't appreciate that.

I only travel through BR on bicycle. The last time I went there by auto was probably 30 years ago. And it was ricidulous even then.

It's not the bike lanes, it's all the cars that are the problem.

Broad Ripple isn't progressive in any way. Filled with affluent white people, plus a few hippies, it's as edgy as Castleton Square.

Indy is dominated by the automobile in a way that few cities can compare to. We've designed our infrastructure so well and have so little density that on the whole, traffic flow is fairly easy.
If I'm not mistaken, the Broadripple Village association ASKED for those bicycle lanes, and I would guess that they're probably asking for these density-increasing developments as well. Sounds like they are trying to discourage autos and encourage more pedestrian/cycling transport, which I applaud. I would simply caution that because BR is nestled inside one of the most car-dependent cities in the country, it's going to be a difficult transition.

P.S. I ride those bike lanes and don't feel that I'm taking my life into my hands. I'm sure Mr. Ogden appreciates the fact that they're quite wide, and are not laid down next to parked cars. The intersection design is a compromise, but overall they're not bad at all from a cyclist's perspective.

Any idiot who had a hand in giving us that stupid bicycle trail on a city street needs to be punished and humiliated.

What a horribly inept and moronic urban planning disaster. The taxpayer-funded retail building advertised as a parking garage is a horrible idea, as is the development planned for the Shell station.

They are ruining Broad Ripple.

No, Downtown Indy, you're the problem. Cars are one of the greatest benefits of modern life.

Cars are over 100 years old. There's nothing modern about them.

As far as bike lanes go, they are some of the safer ones in the City. That's primarily because most of the cars are backed up at stop lights while the bikes go by them. The high curbs though are not good for bike lanes. It cuts off the bicyclist from getting out of the way if there is a car drifting.

The problem is that the bike lanes removed traffic lanes. So you have more idling cars, more pollution and more gas used. It couldn't be a less environmentally-friend design. And the bike lanes were not needed. There is a perfectly good sidewalk in the area that could have been converted into a walking/biking path that would have been much safer for bicyclists and also not eliminated traffic lanes.

As far as the Broad Ripple Village Association, I have a link to an article I wrote about that worthless organization that doesn't seem to care about people who work or live in Broad Ripple.

They spent millions to upgrade Broadripple Ave. It WAS a big improvement then the hallucinators decided on bike lanes to be part of the big lib takeover of sanity. This insanity will continue with their mass transit which will zap mainly Marion county with tax increases in every category including property taxes which will give IndyGo freedom to increase budgets without restriction. Carmel does not have property taxes for a bus service.

Paul chooses not to see the bicycles using the bike lanes. If he were ever to look up from his cell phone while driving, he would see dozens of local residents (read: not commuters) using the lanes for their intended purpose. What a great asset to the neighborhood the bike lanes are!

Read (!!!), read driver's manuals of any or most states which afford bikes the same right of way as cars except for interstates. If you know how to ride, you don't need narrowed lanes poorly placed or wedged into existing right of ways. Cyclists have the same lane privileges (and obligations to fellow commuters) as cars.

Rhonda, in the last several years I've ridden over 10,000 miles in the city commuting by bicycle. So I think I know something about bicycling in an urban environment. Most of the bike lanes do not make biking more safe. (Talk to people who ride a bike as part of their jobs...most avoid bike lanes.)

Bicycling safety experts teach you to "ride wide" and move over when a car approaches. Bike lanes put the rider at the side of the road where he/she is less likely to be seen. It gives riders a false sense of security. Many of the lanes are very narrow and/or filled with broken pavement.glass and other debris that forces the bicyclist to swerve often into a traffic lane. Then you have the horribly dangerous problem of dooring where many bike lanes pass by parked cars that could suddenly throw open a door into the bike lane causing the rider to hit the door or suddenly swerve into traffic. You also have the problem of high curbs that cut off a bicyclists escape path when there is a drifting car. Contrary to what some recreational bicyclists think, the line doesn't actually stop cars from entering bike lanes. Then you have some lanes where there is a great speed disparity that makes commuting by bike dangerous. An example is the Allisonville bike lanes.

Probably the safest place to ride in the City is downtown Indianapolis on the streets which have wide traffic lanes, lower speed traffic and no bike lanes. Riding on Delaware, Pennsylvania, etc., is a piece of cake. As safe as one can be in an urban environment.

I'm in Broad Ripple all the time. Rarely do I see the bike lanes used. (At least by bicyclists. I see cars use them all the time.) Friends who live and work in the area, report the same. But let's be extremely generous and say five bicyclists use it per hour. Is that really worth taking out two traffic lanes impacting hundreds of cars that pass along Broad Ripple Avenue? No, of course not. Further, there is a sidewalk in the area that can easily provide the same function and provide much more safety for the bicyclists and the motorist. As a bicyclists, I put safety first and I don't intentionally put myself into potentially dangerous traffic when there are options that remove me from the traffic.

The only part I disagree in your 9:24 comment, Paul, is Delaware. I don't know what it is about that road compared to the other one way streets in downtown Indianapolis, but people drive like maniacs on that one.

And Cato, riding a bicycle is one of the great joys in life. Not only that but it's Greeeeeeeennnn!!

Practically all the motorists I see are dour, aggravated bundles of frazzled nerves. All the cyclists I encounter are smiling, happy and cheerful.