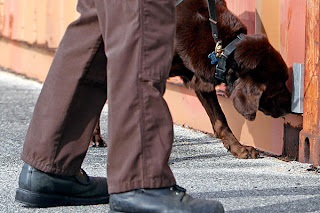 
While much of the attention this week is on the two same-sex marriage cases, an important ruling was handed down on Tuesday that constituted an increasingly rare victory for the Fourth Amendment under search and seizure law. In Florida v. Jardines, the Court ruled 5-4 that police needs a warrant to use a drug-sniffing dog on the exterior of a home....

The case presented a potential disaster for privacy law. Miami police received a tip that a house of Joelis Jardines was the location for a marijuana grow operation. The police only took 15 minutes before calling in a K-9 unit. There was no criminal activity noted, but they later said that they were suspicious that an air conditioner was kept running for the 15 minutes . . . in Miami.

When Franky the dog arrived he alerted his handler on the presence of pot and that was the basis for the warrant used to raid the house.

Jardines was arrested and charged with illegally growing marijuana.

The Florida Supreme Court found the search to violated the Constitution. Scalia and four justices agreed. He was joined by Associate Justice Clarence Thomas — not someone viewed as a defender of privacy principles. They relied on the principle of curtilage, an area outside of the house viewed as protected. They were joined by Justice Elena Kagan (with a concurrence) and Justices Ruth Bader Ginsburg and Sonia Sotomayor.

In a statement that distinguished the other recent dog sniff case (Florida v. Harris) where the court allowed the use of a police dog with regard to a stopped truck, Scalia emphasized “[w]hen it comes to the Fourth Amendment, the home is first among equals,” he wrote. The right to be free of unreasonable governmental intrusion inside the home “would be of little practical value if the state’s agents could stand in a home’s porch or side garden and trawl for evidence with impunity.” Scalia’s reliance on the 2013 United States v. Jones decision (barring the use of a GPS tracking device on a car) reinforced his property approach to such questions (a problematic rationale as I previously discussed). Indeed, it was that property emphasis that promptly the concurrence from Kagan. Scalia returns to the notion of trespass as defining the fourth amendment protections — a position once rejected with the infamous trespass doctrine before Katz.

To see the rest of Turley's article, click here.

The case created very interesting coalitions on the Court.  On the side finding a 4th Amendment violation were conservatives justices Scalia and Thomas and liberals Kagan, Ginsburg and Sotomayor.  On the side finding the search to not violate the 4th Amendment  were conservatives justices Roberts and Alito, swing vote Kennedy and liberal Breyer.
Posted by Paul K. Ogden at 8:21 AM

Scalia has always been protective of the Fourth Amendment. Remember he wrote Kyllo.

Wow, by 5-4 we've kept the wolves at bay. The minority based their vote on the fact that people are allowed to go up to someone's door, and that the cops used a dog rather than an electronic device.

That's a 'statist' point of view because cops don't really have a right to even set foot on someone's property without a warrant, unless they're responding to an emergency, or they've seen a crime occur, or they're serving a warrant.

People in general don't have a right to come to my door - that's just a societal custom we've accepted. But if I see someone starting to walk up my driveway and I tell them to stop, they have to stop.

Police cannot rely on this custom in their effort to obtain evidence. So Breyer's no liberal, he's a statist. I'm surprised Ginsburg voted in the majority - she voted for the government on Kelo and on medical marijuana.

Hot on the heels of a contrary decision about dogs and cars.