The last couple days legal and lay observers were watching the events at the United States Supreme Court where legal arguments were being made as to the constitutionality of state prohibitions on same sex marriage and the Defense of Marriage Act (DOMA). 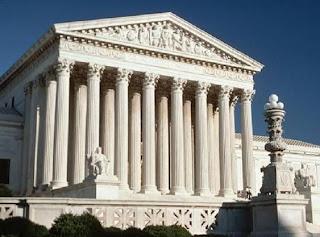 To recap, DOMA is an act passed by Congress in 1996, and signed into law by President Bill Clinton, which said that states did not have to recognize and give effect to legal same sex marriages that take place in other states despite the Full Faith and Credit Clause which would normally mandate that states recognize marriages legal in another state as being valid.  But DOMA did more than that.   It provided a federal definition of marriage as being between a man and a woman and tied some 1,000 plus federal benefits associated with marriage to that definition.  Thus, even if a same sex couple were legally married in a state that allowed such marriages, DOMA says they are penalized by denying substantial federal benefits that would normally accrue as a result of those benefits.  It is this latter section of DOMA that is under attack.

If same sex marriage advocates are expecting a sweeping ruling in which the Supreme Court declares the Equal Protection Clause prohibits state bans on same sex marriage, they are going to be sorely disappointed.    That would constitute Roe v. Wade II, a situation in which the Supreme Court decided to write into the Constitution rights never before previously associated with that document.  (Admittedly the argument for same sex marriage pursuant to the Equal Protection Clause is much, much better than the tortured legal reasoning in Roe that resulted in the "discovery" somewhere in the Constitution of a right to abortion on demand.)   Roe short-circuited political compromises that would have eventually been made should the subject had been left to the state legislature.  Roe left this country bitterly divided over the issue of abortion forty years later.  Even Ruth Bader Ginsburg, one of the most liberal members of the Court, recognizes that Roe was a mistake...that the Court should have left abortion issue to be sorted out through the political process.

Almost certainly a majority of the Court is going to look at the political battles taking place in state capitols over same sex marriage, including that same sex marriage advocates are now winning, and conclude they should not take over the issue by judicial fiat.

Having said that, if same sex marriage advocates set their expectations a little lower, they are quite likely to be pleased by the Court's ruling.  Accounts of the oral arguments suggest that a majority of the Court will vote to strike down DOMA's provision defining marriage as being between a man and a woman and the federal government awarding benefits of marriage based on that national, rather than a state, definition.  While that won't give the same sex marriage advocates the sweeping national victory they want with a Roe type decision, it will strike down a major impediment to the effect of states allowing same sex marriage.

Ironically that should also make conservatives very pleased.  DOMA's provision defining marriage and awarding benefits associated with that legal definition was an intrusion by Congress on the power of state governments to define marriage.  We conservatives need to be consistent in opposing federal encroachment into a state's policy arena, regardless of whether that policy is one we support or oppose.
Posted by Paul K. Ogden at 9:31 AM

DOMA is so obviously unconstitutional that it makes me nauseous. It's the work of political grandstanders from both parties.

Sort of off-topic, one reason (other than g*dd*mn basic human rights) that same-sex marriage has so many supporters is that employers' health insurance benefits are extended to spouses. Employer-based health insurance started after World War II, when wage controls gave rise to the addition of other benefits. The portion of health insurance paid by employers is enormous, yet the benefit is untaxed.

1) Same-sex marriage, obviously. Live up to the Fourteenth Amendment.

2) If employers provide health insurance, tax it as income. I benefit from it, and can't understand why I get the benefit tax-free, while the self-employed and working poor have to scrounge on their own.

Being self-employed you can deduct your payments for health insurance premiums from your taxes. Still paying for it to begin with is a burden.