In this week's Indianapolis Business Journal, Ed Feigenbaum, who publishes Indiana Legislative Insight, pens an article (premium content not accessible on-line without a subscription) saying that Governor Mike Pence is taking a new approach to many of the policies of the Daniels administration:


One month into the administration of Governor Mike Pence, you can hold one truth to be self-evident:  He's not the second coming of his predecessor, Mitch Daniels. 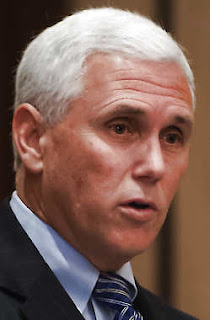 When Pence retained a large number of Daniels administration department heads, many believed this signaled an uninterrupted chain of policy.

But don't let outward appearances fool you.  In assorted subtle ways, Pence has adroitly distances his administration from his predecessor's.

Parse some major moves made by the new governor over the past six-odd weeks and you'll find interesting reversals of tone, message and policy form the past eight years...


Feigenbaum proceeds to cite several examples:
As Feigenbaum notes, Governor Pence isn't alone when it comes to reservations about these matters.   Republican members of the legislature had serious concerns and often grumbled behind the scenes that Governor Daniels was not open to listening to those concerns.  Examples of where the pot finally boiled over and the Republican-controlled legislature ordered investigations to be held despite Daniels' fierce objections is the FSSA Medicaid privatization and problems regarding the operation of the Department of Child Services.

Governor Daniels' handling of the budget was nothing short of brilliant.  He took us through a the worst recession since the Great Depression without a tax increase, while holding the line on spending, and was willing to finally take on the elephant in the budget room - never ending education spending increases under both Republican and Democratic Governors.   But one area where Daniels fell short, and Pence can vastly improve on, is administration.  Part of that improvement requires accepting the fact that being elected Governor does not mean you know everything and to be willing to listen to the input of others, particularly legislators who are the governmental eyes and ears around the state   It also means admitting when things aren't working and a new direction needs to be taken.  Those are character traits more than anything.  Feigenbaum makes the case that, although still early, Pence may have those character traits needed to be even a more successful Governor than his predecessor, Mitch Daniels.
Posted by Paul K. Ogden at 9:03 PM

You are of course overlooking the fact that Indiana now pays the highest Federal Unemployment Tax in the country! And that Daniels admin cost the State half a billion dollars because of the boneheaded IBM FSSA fiasco! Why the feds havent investigated this crap is beyond me! How much longer must Indiana tolerate this corruption before people wake upa nd throw the bums out! Word to politicians grow a pair and stand up for the people of Indiana or wind up like the oddious now former Senators Lugar and both Senator's Bayh!

One tax increase and nothing about reducing government.

Why do Governor Pence need veto power over the airport board members for the Chicago/Gary Airport that are selected by the elected officials of the City of Gary? This seems to be Big Government control to me. Are not the government of Gary able to make good choices for their airport. And concerning Hammond what right does the state have to tell them how to charge fees and taxes on for profit landowners? I have not seen any state money which has been taken from the Region put back in to help with building up this area. We have funded everybody else to our own detriment.

Concerning the State Income Tax cuts the Governor wants now is not the time. We agree with the House proposed budget. 100.00 dollars per tax payer is nothing in the long run if all the numbers are correct. The future need to be invested in first then the rest will follow.