Who to Blame for Ice Freezing Over in Hudson Bay Trapping Killer Whales? Why "Global Warming" Of Course 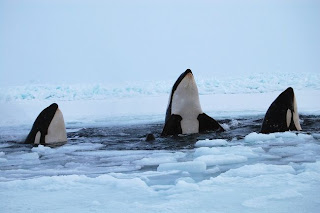 It is shameful the lengths alarmists will go to in order to connect things in the environment to "global warming."  This time it's the story of so-called Killer Whales (Orcas) trapped in the ice of Hudson Bay off of Quebec.  The New York Daily News reports:


A pod of killer whales has become trapped in Arctic ice, taking turns breathing out of a small opening in the frozen water as Canadians brainstorm how to save the massive orcas.

The whales were discovered in the frozen pool in Hudson’s Bay on Tuesday by a hunter from the nearby Quebec village of Inukjuak.

About 12 whales appear to be trapped, but local officials have estimated as many as 20 are swimming in an area 30 feet square. Video shows the massive whales alternating to surface and take breaths.

Of course, this event getting the attention of people throughout the world has to be a direct cause of "global warming," right?  You betcha.  The article continues.


Experts say the massive mammals have only been visiting the region in the past few decades, an area they can now access presumably because global warming has reduced the amount of ice caps, which had previously prevented the trip.

“The reason they can now access the Arctic, is because there is a lot less ice because of global warming,” Andrew Trites, a marine researcher at the University of British Columbia, told the Star.

Of course, Andrew Trites is one of those researchers whose funding depends on continuing the global warming scare.  In February of 2012, he was complaining about research grants drying up for his study of why sea lions were becoming endangered.  You can be the reason is "global warming" not the natural process of species become extinct which happened since mammals first came to the planet.

As I was writing this, the news broke that the whales have gotten free due to a change in the current.   Given that this is good news, I'm sure global warming won't be blamed.
Posted by Paul K. Ogden at 11:41 AM

In the early 1600's, William Baffin was exploring the Arctic. He claimed to have found navigable passages through Hudson Bay. These were included on maps drawn starting around 1666. Trouble is, that by the 1800's, no one was able to find a passage. This lead to a lot of scholars insisting that since they could not find a passage at the present time, that there was never a passage. Since 2007, there is a passage; this has been attributed to global warming.

Global warming has very little to do with the NW passage opening and closing. Of course, this is being ignored by anyone reporting on the story or any researcher.

Your total misinterpretation of scientific evidence is alarming, Paul. Yes, if there is less ice where it once was covered with ice, that is evidence of global warming.

It certainly isn't any definitive evidence of "anthropogenic global warming." Especially when there exists in the historical record a period of similar ice coverage that existed prior to the industrial revolution.

Not to mention the fact that large scale warming periods are traditionally better for the human condition than cooling ones. Even if AGW exists, what proof is there that it is a bad thing?

Rhonda, I see your point. Like last week, my yard was covered with snow and ice, and only a week later, most of it has melted. Must be global warming.

Indy Rob: That's exactly the short-term view that so-called naysayers have been touting for decades. Perhaps you should take a course in statistical significance.