Governor Pence Issues Flurry of Executive Orders on First Day; Will Government Reorganization Be On the Agenda? 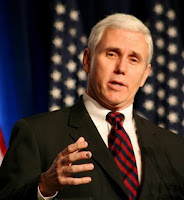 Pence got right to work after being sworn in. He signed 15 executive orders, several backing up campaign pledges. That includes a moratorium on new regulations. Pence wants to get the red-tape out of the way for businesses.

He also will require certain state agencies to create family impact statements – another campaign promise. Pence said his definition of “family” goes beyond two-parent households. His sister is a single mother, and his wife was raised by a single mother.

Pence rescinded one executive order, moving Indiana Education Employment Relations Board from the Superintendent of Public Instruction to the governor’s purview. That move is likely to raise eyebrows. Superintendent of Public Instruction Glenda Ritz is the only Democrat in state office, having defeated Republican incumbent Tony Bennett in November.

Pence also created an Office of Energy Development and agreed to extend the service of various boards and offices.

Certainly a busy first day. One issue though that I think would be prime for consideration by this Governor is a reorganization and streamlining of state offices to eliminate duplication of effort as well as some offices.  Consolidation in others might be useful.

Governor Daniels had a number of strengths in office, in particular his handling of the budget during trying economic times. But while often talking about big picture issues, Daniels surprisingly did not seem to have a strong interest in less glamorous day-to-day administrative issues.   As a result, in addition to missing a chance to streamline government, the activities at some agencies brought embarrassment to the Governor's Office.  These include agencies paying bills late resulting in millions of dollars in late fees, an agency spending millions on lavish office space, and several others unfortunate stories that made headlines.


An exhaustive inventory of state government operations leading to a comprehensive reorganization hopefully will be a Pence goal. But. in addition to an overhaul of state government, the Pence team would be well advised to exert a stronger hand when it comes to supervising the activities of the state agencies.

Today was a day to talk about the big picture.  But in the four years that lie ahead, it may well be the "little issues," those issues that occupy the day-to-day task of governing, that matter the most when final judgment is rendered on the success or failure of the Pence administration.
Posted by Paul K. Ogden at 4:51 PM