Lincoln and His Support of a Constitutional Amendment Protecting Slavery

Late this afternoon, I am off to view the movie Lincoln.  The topic of our show Civil Discourse Now on Saturday probably will be on "The Great Emancipator" and the Civil War.  Mark Small and I decided watching Lincoln would be a good precursor to that show. 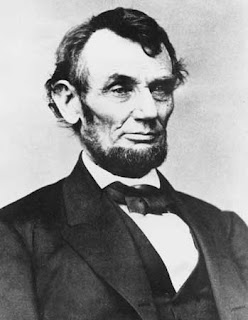 In preparation, I have also spent time reviewing the history surrounding Abraham Lincoln's tenure in office, which has brought me to various discussions of our 16th President, by lay people as well as academics.  It is amazing to me how people so idolize Lincoln that they are willing to ignore undeniable facts about the President.

The fact is, one of those indisputable facts, is that Lincoln, in an effort to ward off secession by southern states, actually came to office supporting a proposed constitutional amendment to make slavery permanent.  The name of that proposal was the Corwin Amendment, which stated:


No amendment shall be made to the Constitution which will authorize or give to Congress the power to abolish or interfere, within any State, with the domestic institutions thereof, including that of persons held to labor or service by the laws of said State.

The "domestic institutions" reference was to slavery.  It not only would have stopped Congress from outlawing slavery, the language attempts to block future constitutional amendments to overturn the Corwin Amendment.

In early 1961, the amendment passed both the House and Senate by the 2/3 majority.  Even though he had no say in the amendment process, then President James Buchanan took the unusual step of signing the amendment.

By the time Lincoln was being sworn in on March 4, 1861, the Corwin amendment was on its way to the states for ratification.  Lincoln in his inauguration speech recognized the amendment and expressed support:


I understand a proposed amendment to the Constitution—which amendment, however, I have not seen—has passed Congress, to the effect that the Federal Government shall never interfere with the domestic institutions of the States, including that of persons held to service....[H]olding such a provision to now be implied constitutional law, I have no objection to its being made express and irrevocable.

Despite the idolized view of Lincoln, it appears the President early in his term was more than willing to trade making slavery a permanent fixture, at least in the South, for keeping the union together.  While he was clearly against an expansion of the institution of slavery into new territories, Lincoln's support of the Corwin Amendment no doubt leaves a tarnish on the Lincoln legacy.
Posted by Paul K. Ogden at 9:43 AM

I don't know if I'd say his legacy was tarnished by the Corwin amendment push (especially as we've known about his stance on the amendment since 1861) since it is well-known (then and now) Lincoln was for the preservation of the Union over all else before and during his presidency. He was on record for pushing African re-colonization. Now the fact this isn't told as often as it has been is a tarnish to his legacy, and pieces like yours are always good to have to remind us of Lincoln's imperfections. He was a masterful politician, though, (who could do so many unsavory things, just like they do today) in so many ways it amazes me every time I read a book about him.

He was not perfect (far from it) and his saintliness is often over-stated, but a perfect person could not have done what he did to keep the country together at that time.

I enjoyed the Lincoln movie (also not perfect) and would like to see it again; it might be best, going into it, to ignore some of the historical inaccuracies and just enjoy the movie as a portal back to a different time that is mostly a well-done film without as much of the Spielburg sappiness we've all come to expect.

There are lyrics in a Neil Young song that paraphrased suggest "they call me a saint... but I'm not."

It isn't new but the modern preoccupation with legacy is an impairment to average or even good men (people) doing great things.

After watching the Lincoln movie I have to give it a major thumbs down. This is what I wrote on Facebook:

"Saw the Lincoln movie tonight with my left-wing, socialist friend Mark Small. Despite our different politics we left the theatre with the same impression. Thumbs down. Mark called it "mediocre." I concur. As someone who loves history, it was an insult. It overly dramatized everything, bought into a political correctness that was borderline laughable, and the historical mistakes are just too many to list here. Lincoln's leadership apparently consisted of just telling stories and Tad, the Lincolns' youngest child was constantly being inserted into scenes for no intelligble reason except maybe Spielberg wanted the movie to appeal to kids as well as adults. I'd give it maybe 2 of 5 stars, might even go to 1 1/2."

I would add that the opening scene (not in the slightest bit realistic) to the very end, it was filled with historical fiction a rewriting of history to make it politically correct and overdramatized. The scenes on the floor of the House were particularly laughable. Spielberg even changed the name of one of the legislators because he didn't want to offend the family. Huh? It's history...not only that he voted for the amendment.

A little knowledge is a terrible thing,. Trashing Lincoln is almost a a sport for stupid people.

First, learn Lincon's full quotes, and why he said and wrote what he did.

Second, learn what Frederick Douglass said about Lincoln -- Douglass was there, a genius himself.

Lincoln said, oh about 100 times, that to stop the SPREAD of slavery was the only practical way to kill it. Got that? There was no will, even during the Civil War, to fight to end slavery.

See the best blog about this - called Trashing Lincoln, the past time for people who are tired of playing with their dick.