Indianapolis Star columnist Matthew Tully pens a column in which he says he is "disappointed" because the Indiana General Assembly is "underperforming." In an even worse slur, he accuses the legislature of being comparable to the Chicago Cubs, a team with a century long futility and currently the worst record in Major League Baseball.  Tully offers just a few random examples to back up his stellar analysis (all sarcasm intended), before focusing on legislation prohibiting local communities from banning the private use of fireworks during the days leading up to and following the July 4th holiday. 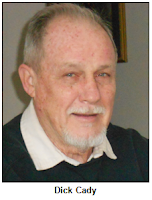 Hmmm, how ironic.  I continually am "disappointed" that the Indianapolis Star employs "underperforming" political columnists who can't bring themselves to write about anything controversial that might put local politicians and powerful downtown players in a bad light.  While the Star is relegated to the role of cheerleader for local power brokers, the Indianapolis Business Journal and local TV reporters do yeoman's work in detailing corruption and the pay-to-play politics that dominate Indianapolis.

Ironically, I was talking to a friend today who brought up the name of Dick Cady, the legendary Indianapolis Star investigative reporter and columnist who wasn't afraid to report on local politicians' wrongdoing.  In the early 1970's, Cady helped the Star win a Pulitzer Prize with his work exposing corruption in the Indianapolis Police Department.

Where's the "like" button? The entire Indpls Star isn't even a shadow of its former self. I'll be the Pulliam's wouldn't use it to line their bird cages...

Paul--As a lifelong fan of the Chicago National League Baseball Club, I have to say yes the 2012 Cubs ARE that bad. Next year, however, we shall win the whole enchilada.

The Star frequently starts his column on the front page as if his opinion is earth shattering news. I hope the new editor will find an appropriate place for the opinion in the obituaries section.

No disagreement that Tully is an arrogant, sanctimonious hypocrite with delusions of adequacy, but he's right about the fireworks law.

Paul, your envy of Tully's relevance is unbecoming.