Bill of Rights to be Discussed on Civil Discourse Now 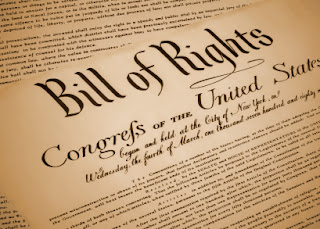 Today on Civil Discourse Now, we're going to be talking about the Bill of Rights with our all attorney panel, including guests Adam Lenkowsky and Jeff Cox.

Congress shall make no law respecting an establishment of religion that allows religion to, in any way whatsoever, be involved in government; however government shall be allowed to interfere in the free exercise of religion whenever government deems certain religious views are wrong or just not in people's best interests.  Congress shall make no law abridging the freedom of speech, or of the press; or the right of the people peaceably to assemble, and to petition the Government for a redress of grievances.

A well regulated Militia, being necessary to the security of a free State, the right of the people to keep and bear Arms, shall not be infringed.  Government can regulate guns any time it wants as they are bad...very, very bad.

The enumeration in the Constitution, of certain rights, shall not be construed to deny or disparage others retained by the people.  Unelected federal judges shall have the right enforce this provision by "finding" various rights people have but which elected legislatures have not yet been able to locate.  Oh, and people shall have a "right of privacy" because, well that just sounds like something that should be in the Constitution.

The powers not delegated to the United States by the Constitution, nor prohibited by it to the States, are reserved to the States respectively, or to the people.

I agree with there being a 'right to privacy'. Felix Frankfurter said something like, the right to be left alone is the most important right. This only seems to apply to abortion however, not to gun possession.

The 10th Amendment has been de facto repealed, which is a big story never told.

It was funny. Today on the show we got to the 10th Amendment, but we were out of time. I mentioned that that didn't matter that Supreme Court defacto repealed it anyway, said it was a mere "truism." We all had a big laugh.

I don't agree with a free floating "right to privacy" that a judge can apply whenever he or she wants. There are certainly elements of privacy protection in the constitution, such as the protection from unreasonable search and seizure. That doesn't mean a general right to privacy should be created in order to be applied at the whim of judges.