Bullying: Is an Answer Teaching Self-Defense?

I haven't yet written on the bullying topic, but since it was in the news recently because the incident involving Darnell "Dynasty" Young and it will be a topic on Saturday's Civil Discourse Now, I thought I should devote at least a few lines to the subject. 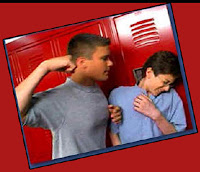 I have to admit, I don't 100% understand the bullying subject.  Perhaps that is because I don't recall ever being  bullied in school, either physically or emotionally.  Although I was then more shy than I am today,  I was fairly popular in school and other students didn't tease me. While I wasn't tall, I lifted weights and was pretty strong.  Growing up on a farm with four brothers, I think I could have defended myself against virtually anyone in the school should I have been physically assaulted.  I can't imagine I would have ever tolerated bullying.  Rather than turn in the bullies, which even back then was frowned upon, I would have retaliated physically against anyone who attempted to bully me.  Being the son of a Marine, I would have been much more bothered not retaliating to bullying than anything that might have happened to me should I have tried to defend myself.

I am sure bullying went on around me, but I recall very little of it.  I do remember a quiet, nerdy type kid who rode the same school bus I did and how some of the other kids teased him.  I made a point to befriend the boy, sitting by him on the bus and talking to him.  The others saw me befriend him and the teasing stopped.  He eventually came out of his shell.  Looking back, that was one of the things I am most proud of.

In college, I remember a trio of thugs who lived in one of the dorm room who everyone was scared of.  One of them had been in the military and another supposedly kept a gun in his dorm room.  They tore up the the bathroom on our floor one evening and the dorm apportioned damages to everyone who lived on the floor.  I didn't have a lot of money and was really ticked that I was being asked to pay for their damage.  Everyone was scared of the thugs, but I,  in a fit of insanity, went to their room and told them in no uncertain terms that I wasn't going to pay for their damage to the bathrooms.  Looking back, that confrontation was probably not the smartest thing I ever did.  But when it came time to pay the damage bill, I was the only one who did not have to shell out any money.  The thugs paid my bill.

I know my experience is probably not the norm and that others had it tougher than I did.  I wonder though if taking the possibility of retaliation away makes the bullies more likely to commit their bad acts.  Maybe we should be teaching people to defend themselves and not punish them when they choose to do so?  From my Internet research (a dangerous phrase post Rep. Morris), it seems like I'm not alone in the thought that teaching children self-defense techniques can be a way of stopping bullying.
Posted by Paul K. Ogden at 8:58 PM

Pete, I fully expect to be mocked for my suggestion of self-defense as a solution to some of the bullying that's going on.

Paul, you no doubt know that the underside of a bully reveals a coward, who depends on the bluff odds that self defense is seldom taught or encouraged...

Actually, self-defense as taught in martial arts courses does more than provide the knowledge of how to fight back, but actually leads to increased confidence and self esteem. This is all for the good.

However, we as a society should be showing our disapproval of bullying, and not letting it go as "boys will be boys". The damage goes much deeper than most believe.

I think that the willingness to stand up for oneself is important,but it is also important to deescalate things by not acting as a victim, by not overreacting to insults. The current emphasis on bullying implies that in a student conflict that there are bullies and victims, when both sides are doing things to escalate the situation.

I do not believe that it is right for Darnell "Dynasty" Young to be insulted or have rocks thrown at him, but I also believe that the Tech principle's advice to be less flamboyant, to stand out less is reasonable as following this advice could have deescalated the situation. I also have noticed that the local news coverage has presented Dynasty as a victim through one-sided coverage, I think that there is more to the story.

The current emphasis on eliminating bullying involves taking the word of self-described victims that they did not do nothing, and most of the time this is not true.

The news media has done a poor jobs in reporting what took place. It has been onesided in making Mr. Young a victim.There may be more to this story that what has been said. The road to 'hell are paved with good intentions'. A rush to judgement serves no one well.