Given he has governed as a RINO, I guess we shouldn't be surprised by Indianapolis Mayor Greg Ballard endorsing RINO Sen. Richard Lugar.  Still it is noteworth that Ballard actually began his political career as part of the movement that is now known as the Tea Party, a movement which strongly opposes Lugar and supports State Treasurer Richard Mourdock. Ballard has completed the sell out of those folks.  From Senator Lugar's press release announcing the endorsement. 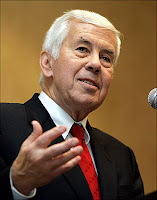 Ballard said Lugar's leadership and vision on the local, state and national level have always been "decades ahead of its time."

To see the rest of the press release, click here.

I guess next we can expect Mayor Ballard will endorse Mitt Romney.
Posted by Paul K. Ogden at 1:46 PM

"Decades ahead of its time"? When America is ruled by the military? That seems about right.

I guess Ballard takes orders (instead of giving them).