Heavily Republican Indianapolis Council District 24 features a battle between Republican Councilor Jack Sandlin and Libertarian At-Large Councilor Ed Coleman.  Concerned about Coleman, the party has sent out post cards in support of Sandlin, a generic-type version that apparently is going out for other Republican council incumbents which lauds Sandlin's support of the Ballard agenda.  The post card talks about how Sandlin has helped pass "honestly balanced budgets each of the last three years," how he has "supported property tax caps, and supported "approving placing Mayor Ballard in charge of public safety" and supported "increased public safety funding."

The only problem is, Sandlin did not take a seat on the Indianapolis City-County Council until late 2010.  Bragging about Sandlin's support of the Ballard agenda when he wasn't even on the council seems to be at worst dishonest and at best sloppiness by party officials.

It is also a stretch to say he was "elected" and now should be "re-elected."  Sandlin received his position when he won an unopposed precinct committeeman caucus vote to fill a vacancy when Councilor Michael Speedy was elected to the legislature. 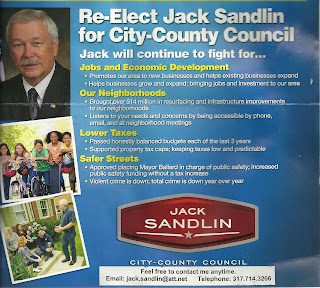 I don't see AI's indignation and cries of "Fraud!" on this one. Hmm.

Yep. Sandlin's claims on this mailer are questionable at best. Especially the "voted for balanced budgets the last three years" one.

Um....A) You've been on the Council 11 months, and; B)"Honestly balanced budgets" is not even close to what Indy has anyway.

I have a blog on this ready to go. I'll hold off a couple days now before posting, but it's pretty similar.

Sandlin is definitely a step down from Speedy. I would get email answers from Mike within a few hours, or no more than the next day.

Not so for Sandlin. I haven't gotten responses at all from emails to him on the two occasions I wrote him.