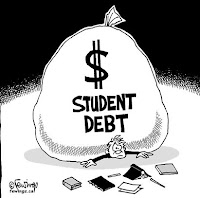 I have been complaining for at least 10 years that law schools have been lying to prospective students about employment prospects in the legal profession and that it was only a matter of time before those schools get sued for fraud.  It's happening.  The American Bar Association Journal reports:

Two law firms announced Wednesday that they plan to sue 15 more law schools in seven different states, according to Law School Transparency, which posted the press release. The suits will challenge the schools’ reported employment rates for law graduates.


Prior suits against Cooley Law School, New York Law School and Thomas Jefferson School of Law in California have claimed law students were misled by job statistics that didn't specify whether jobs obtained by grads were in the legal field.

In a conference call with reporters, lawyer Jesse Strauss of Strauss Law said the 15 new schools were targeted either because alumni approached the law firms, the schools were in markets saturated with lawyers, or the schools released implausible statistics. According to the press release, the average debt for 2009 graduates of the 15 schools is more than $108,000.

In a related story in the ABA Journal, , California Senator Barbara Boxer continues to question the American Bar Association's lack of transparency in its employment questionnaire used by most law schools:

Arthur Gaudio, the dean of Western New England University School of Law in Springfield, Mass., chairs the Legal Education Section’s Questionnaire Committee. He defended the two-stage process in an ABA Journal interview in late September, saying extra time was needed to draft the questions and define the new categories.


He gave an example of the problems being tackled by his committee. How should a law graduate who has an accounting job be classified? Is this a JD preferred job? Is it a job in another profession? Is it both?

“It’s going to take work by the committee to come up with the right questions,” Gaudio said in the September interview. “But we’re determined to make it happen.”

Boxer’s letter also calls for the auditing of law school statistics and the dissemination of information about the risks of accepting merit scholarships.

Again I ask, where is the Indiana Bar Association when it comes to these students who are defrauded by this state's law schools?  Where is the IBA when it comes to opposing another new law school in the state, i.e. Indiana Tech, which will have students amassing six figure debt for an education that decreases their employment prospects?
Posted by Paul K. Ogden at 8:56 AM

Better yet, it is time for an antitrust suit to bust up the legal cartel.

The Indiana Bar Association should take you up on your challenge, Paul, as should the Indianapolis Bar Association, to which I belong. I am thrilled to learn about these law suits.