How to Get Around that Pesky Constitution: City Decides to Treat Prostitution as Civil Offense 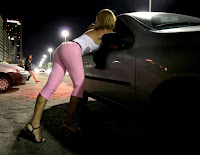 The Indianapolis Star has an interesting piece this morning discussing the use of fines under a city ordinance as a substitute for criminal prosecution of prostitutes:


As Super Bowl XLVI draws huge crowds and international attention to Indianapolis, city officials and police will keep their eyes on a seedier side of the game that could bring hundreds of prostitutes to town.


Some will come in from other cities and advertise themselves on websites as "escorts" offering massages and other services. Police are issuing a warning: That next client you visit in Indianapolis just might be a cop.

Last week, the Indianapolis Metropolitan Police Department and the Department of Code Enforcement used the crowds visiting for the Brickyard 400 to set up a sting of unlicensed escorts as practice for more enforcement efforts leading up to the Super Bowl.

..
Kivett knows his nine-officer vice unit is outmanned when it comes to enforcing the city's prostitution ordinances. Teaming up with the Department of Code Enforcement, the city licensing agency, makes a lot of sense, he said.

"Most of them get more from that ticket than they do in criminal court," Kivett said.

Arrest a hooker, and she will face a night in jail and, in some cases, a small fine. But write her a ticket, and she'll face a fine of up to $2,500 and a court order to find a new line of work.

City Prosecutor Helen Marchal said the fines are up to $7,500 for repeat offenders. The typical fine is about $500.

With the civil case, you really hurt them by dipping into their pocketbooks," Marchal said. "If the arrest doesn't act as a deterrent, maybe the fine will."

A city ordinance requires escorts to get a license. An escort license is $103 for a person. Licensed escorts also must work for a city-approved escort agency, which needs a separate license that costs $319.

Because the city has no licensed escorts, Code Enforcement administrator Adam Collins said, any working in Indianapolis are violating the ordinance.

Police have the authority to write a ticket for the ordinance violation whenever they make an arrest, but Thursday they teamed with Code Enforcement agents and three metropolitan-area hotels to conduct stings.

Now let's say the prostitute is given a ticket for violating a city ordinance.  That is civil in nature. The previously mentioned protections afforded a criminal defendant go out the window.   The person doesn't have a right to a paid public defender if poor.  To fight the fine, he or she would have to spend a few thousand dollars to hire an attorney.  The government can get in evidence not admissible during a criminal case. The burden of proof is much lower - the government can win with a simple preponderance of the evidence.   It's easier to just pay the ticket.

Prosecutors prefer to bypass the criminal justice stem because virtually all the individual protections in a criminal case are gone when the person enters the civil arena.  The odds are so stacked against the individual, most will simply throw in the towel rather than fight.  That is exactly  the reason prosecutors love civil forfeiture.  They can take people's property away from them without rights guaranteed them under the Constitution.

Regarding civil forfeiture, is it any wonder, the ethical lapses created by a system that allows law enforcement officials to claim other people's property?  Recently a woman told me how when her son was arrestedfor drugs, police officers started walking out with the stepfather's tools, each claiming ones they liked.  (Not sure how fancy tools were used in the use of drugs.)   With civil forfeiture laws and lack of judicial and administrative oversight, these ethical transgressions are indirectly condoned.

For another take on this story, see Advance Indiana.
Posted by Paul K. Ogden at 11:36 AM

"With civil forfeiture laws and lack of judicial and administrative oversight, these ethical transgressions are indirectly condoned."

Damn it, Paul, start pointing the finger in the right place. The laws don't act on their own. The problem isn't the laws, it's the police.

Get rid of the police, and the laws are mere inkblots.

Police are the problem. Let's all fess up to what the real problem is.

Part of the problem too is that judges aren't enforcing the law. The law says that they are suypposed to make a case by case determiantion of law enforcement costs and then cut a check to the common school fund for the difference. But rarely do courts make this determination. There's no check on what's going on...the defendant just cares that he lost his stuff. Who exactly gets his stuff isn't that important to him.

So what happens if they dont pay the fine or show up for court? Jail? Do we have space for that?

Can they get jail time for a civil action? Maybe if they can't pay the fine they could just 'work' it off....hhhmmm

IndyDem, I doubt jail unless they then try to pursue a criminal case. The Indiana Constitution specifically prohibits debtors prison. A judge a year or so ago tried to throw someone in jail for refusing to pay a court fee, but the case gained media attention and the judge backed down.

The civil ordiance wouldn't contain jail time. It's possible the person could be jailed for contempt if they don't pay the fine. There would have to be a showing they're capable of paying and failed to do so. Like Matt says, we don't have debtor's prison.