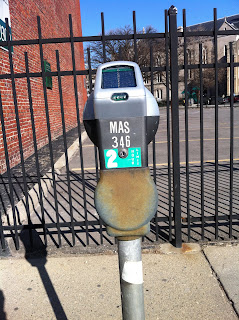 Reviewing the ACS (i.e. "ParkIndy") parking contract with the City, I uncovered another trick.  The contract has it set up so the split is 30% for the City, 70% for ACS.  But when a certain monthly income is reached is reached it becomes a much more favorable 60%-40% split in favor of the City.  This was a factor that the Ballard administration used to sell the contract to a skeptical public.

The problem is if you look at the numbers closely, and examine the current parking meter revenue numbers, you would know the monthly threshold necessary to hit the favorable 60%-40% second tier will never be reached.

According to Schedule 2.1 of the contract, there must be a monthly parking meter revenue of  $583,333 to advance to the second tier 60-40 split.  (The 60-40 split only applies to revenue above the first tier.) The drafters of the contact used a monthly income of $825,000 to construct an example of how much the City would earn with the $583,333 first tier in place.

The estimate is misleading at best, phony at worst.   For the four months from March through June of 2011, the total reported revenue was $1,660,910 or an average of $415,227.50 monthly.  That figure is nowhere near the amount needed to reach the second tier.

But as the rates increase, the second tier target will be hit, right?  Nope, it is a moving target. As of January 1, 2012 (conveniently after the election), parking rates will rise from $1.00 to $1.50 an hour.  At that point increases are tied to inflation increases as measured by the Consumer Price Index.  But the $583,333 monthly inflation first tier ceiling is also adjusted by the Index.  The 60-40 second tier split will almost certainly never be reached.

We will be discussing the parking meter contract and the issue of Internet taxation on a new Internet political discussion show to debut this weekend.  Below is some information on the show written by co-host Mark Small.  We are hoping to match the excitement of Indiana Week in Review.  (Said with tongue in cheek.)

On September 4, “Civil Discourse Now” will premiere at 11 a.m. on the website civildiscoursenow.com. Indianapolis attorneys Mark Small and Paul Ogden will co-host panel discussion on local, state, national, and international political and social topics with different guests each week.

This panel show will be different in several ways. First, no one will talk over anyone else. The
discourse, after all, will be civil. Second, the guests will not be quite what one may expect from an Indy panel show. The first show’s guests will be Bill Levin, Libertarian Party candidate for City-County Council (and something of a Broad Ripple legend), and Jeff Cox, a lawyer with a dry wit (sometimes misunderstood by Mother Jones). The topics will center on the parking meter contract into which the City of Indianapolis has entered for management of that aspect of City Life, and Amazon dot com’s (apparently successful) circumlocutions to avoid sales tax in the Hoosier State.

Mr. Ogden is a conservative Republican. Mr. Small most emphatically is not.
Posted by Paul K. Ogden at 1:05 PM

Great ! Will the videocasts be archived?