I have zero tolerance for these election year stunts where incumbents use taxpayer money to promote themselves.  WRTV's Kara Kenney reports:


Letters and fliers mailed out to hundreds of thousands of Indianapolis residents are at the center of a complaint against Mayor Greg Ballard, accusing him of using taxpayer money to campaign.

The Marion County Democratic Party has filed a complaint with the Marion County Election Board over letters, along with inserts included in recent water bills, touting Ballard's RebuildIndy initiative.

Both the insert and the letter each refer to Ballard three times, 6News' Kara Kenney reported.

Waterworks Board member Andrew Mallon, a Democrat appointed by Ballard, raised concerns about the fliers at an April board meeting in response to a constituent complaint.

"These are promotional materials, plain and simple," Mallon said. "They were not something that should be in our water bills when the person they're promoting is up for re-election."

Mallon works as one of the attorneys for the Democratic Party but said his concern has nothing to do with his political affiliation.

"Whether it's a Republican or Democrat, I think it's wrong," Mallon said.

Ballard spokesman Marc Lotter called the complaint a political distraction by the Democrats.

"(Democratic mayoral candidate) Melina Kennedy and her political allies have called our mayor, who's a Gulf War veteran, cowardly and gutless," Lotter said. "This is nothing more than the same political games we've come to expect from them."

Lotter said the mailings are a way to educate the public about everything from recycling to construction projects.

"We are undergoing the most extensive construction in the history of this city," Lotter said. "I'd say if we have some staff resources and tax dollars going to promote public safety and the safety of construction workers, I think that's money well spent."

The rest of the article or the video can be viewed by visiting this page.

Here is what the offending part of the water company insert says, without the formatting.

RebuildIndy is Mayor Greg Ballard's initiative to transform the City through investment in infrastructure improvements.  With RebuildIndy we are restoring deteriorating thoroughfares, residential streets, sidewalks and bridges, as well as addressing neighborhood drainage and flooding issues and demolishing unsalvagable abandoned homes that pose a public safety threat to neighborhoods.

*****
Unfortunately, the two county party leaders, Democrat Treacy and Republican Kyle Walker, cry wolf so often complaints they make get tuned out pretty quickly.  That's unfortunate because on this point, Treacy is exactly correct.  The water bill insert isn't about imparting information, it's about promoting the Mayor who is just over three months away from an election.   It's disgraceful that he's doing so on taxpayers dime.  However, given Ballard's utter disregard for the best interests of Indianapolis taxpayers in the policies he's pursued for 3 1/2 years, I guess one shouldn't be surprised by this stunt.

I know Lotter has a job to do, but playing the Marine Veteran card....really? (For the record, Ballard hasn't shown the guts to stand up to the profiteers who took over his administration shortly after election.)   Lotter is a city employee and his comments smack of partisan politics.  His claim that the insert can be defended as promoting public safety and the safety of construction workers is insulting to the intelligence of the residents of Indianapolis.  Obviously the insert is all about promoting Mayor Ballard.  As such, the Ballard campaign should reimburse the taxpayers of Indianapolis for the costs associated with this mailing. 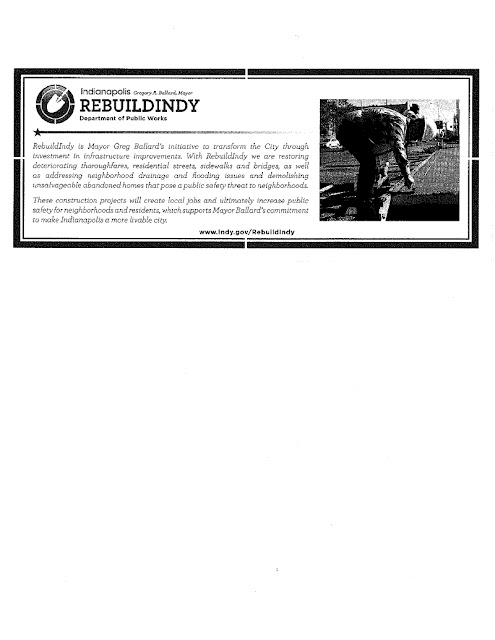