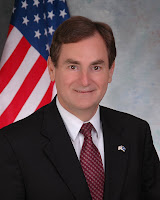 I've been reluctant to comment on this poll until I saw some of the methodology, but news organizations across the country are reporting it. This from Roll Call:

Mourdock had a small advantage over Lugar, 34 percent to 32 percent, in the Basswood Research poll released Tuesday. But Mourdock’s 2-point lead is within the poll’s 4.4-point margin of error.

The conservative, anti-tax organization has not endorsed Mourdock, but the Club for Growth President Chris Chocola has frequently criticized Lugar’s record. Earlier this month, the club sponsored television advertisements blasting Lugar across Indiana.

“An incumbent who sits at 32 percent in his own party’s primary, and trails a much less known challenger, is in a world of trouble,” Chocola, a former Indiana Congressman, said in a statement. “Senator Lugar is a very decent man, but it’s clear from the poll that after 35 years, Hoosier Republicans are eager for a more conservative alternative.”

About one-third of those polled, 34 percent, said they were undecided about the GOP Senate primary field.

I have previously said I am not 100% sure Lugar will go to the post in 2012.  I think there is a decent chance that he will choose to retire gracefully than risk electoral defeat.  Of course, at Lugar's age there is an increased chance that health complications may suddenly put him on the sidelines.
Posted by Paul K. Ogden at 8:09 PM

Mourdock will give no comfort to libertarians, He's no Rand Paul. He's an imperialist and social conservative.

Club for growth..Please.
Pauls lets see the methodology behind the poll, then make your comments.

Just meaningless dribble at this point.

$400K VS $3.9 Million and the fund raising has not even hit full stride yet

I highly doubt Club for Growth did the poll themselves. They probably contracted with a professional pollster. You can't just write off the poll because of who paid for it. It's important to look at what question was asked and how they screened for primary voters, for example.

Paul, I understand that the group probably did not do the poll. However, you know full well that pollsters can slant a pol in any way they want. Unless they publish the methodology behind the poll is is pure speculation at best. I looked at several of their articles and no where is there any data that qualifies the poll.

But,they are getting the attention that they wanted. It's just another right wing group trying to break out of the nutcase pack.Attacking Lugar is one of their tactics.

Its the same crap as the IMPD crime stats. Do you see any hard empirical data that suggests the mode of data delivery? Its all smoke and mirrors prior to an election.

If I remember correctly this is the group that said Mourdock was a man of high ethical and moral fiber..so there ya go. Thats their credibility factor