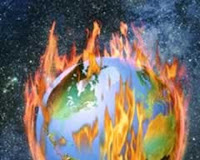 James Taylor, senior fellow for environment policy at The Heartland Institute and managing editor of Environment & Climate News, writes on the Forbes blog about recent data assembled by NASA that blows a hole in the computer models supporting global warming:


NASA satellite data from the years 2000 through 2011 show the Earth’s atmosphere is allowing far more heat to be released into space than alarmist computer models have predicted, reports a new study in the peer-reviewed science journal Remote Sensing. The study indicates far less future global warming will occur than United Nations computer models have predicted, and supports prior studies indicating increases in atmospheric carbon dioxide trap far less heat than alarmists have claimed.

“The satellite observations suggest there is much more energy lost to space during and after warming than the climate models show,” Spencer said in a July 26 University of Alabama press release. “There is a huge discrepancy between the data and the forecasts that is especially big over the oceans.”

In addition to finding that far less heat is being trapped than alarmist computer models have predicted, the NASA satellite data show the atmosphere begins shedding heat into space long before United Nations computer models predicted.

In short, the central premise of alarmist global warming theory is that carbon dioxide emissions should be directly and indirectly trapping a certain amount of heat in the earth’s atmosphere and preventing it from escaping into space. Real-world measurements, however, show far less heat is being trapped in the earth’s atmosphere than the alarmist computer models predict, and far more heat is escaping into space than the alarmist computer models predict.

When objective NASA satellite data, reported in a peer-reviewed scientific journal, show a “huge discrepancy” between alarmist climate models and real-world facts, climate scientists, the media and our elected officials would be wise to take notice. Whether or not they do so will tell us a great deal about how honest the purveyors of global warming alarmism truly are.

My guess is not very honest at all.

On a related note, well-known Indianapolis defense attorney Robert Hammerle a few days ago penned a letter to the editor claiming that the unusually long stretch of 90 degree days this summer proved global warming.  Of course, we had an unusually cold, snowy winter and Hammerle didn't pen a column saying that proved an ice age is coming.  Hammerle also ignored the fact that the some of the warmer years this year would be replacing if the heat continues are in the 1930s.

Hammerle also claims this July's dry spell proved global warming.  In fact, global warming models suggest we here in the United States would have just the opposite - increased precipitation.   But hey, Hammerle, as a criminal defense attorney, is an advocate and from what most people say, very good in his job.  His job is to ignore the facts that contradict his client's position and spin the rest of the facts in support of his client. While that is the way our legal system works, it is, thankfully, not the way science is supposed to work.

The climate has been changing on this planet for 4.5 billion years.  Obviously one hot month is too short of a period to prove a long term trend.  Likewise, the 140 year history of officially recorded temperatures is too short of a period to prove anything.  Long-term changes take millions of years and in the meantime shorter-term fluctuations last tens if not hundreds of thousands of years.  All the climate data should be looked at, not just that climate information that supports a particular political agenda.

It's a shame that science has been corrupted by politics involving in the global warming, er climate change, debate.  The public deserves better.
Posted by Paul K. Ogden at 12:03 PM