An Example of Marion County Forfeiture Abuse: City Refuses to Return Woman's Vehicle Unless She Signs Waiver for Damage Police Caused During Search 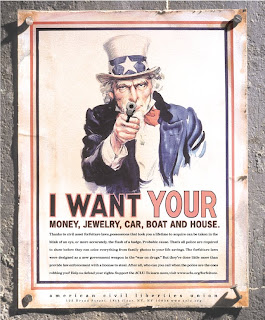 Last week I received a call from a woman whose son was arrested and convicted for a drug offense early last year.  During the arrest, they took the mother's car out the driveway.   The police tore apart the mother's car searching - undoubtedly illegally - for drugs justify a civil forfeiture action.  Nothing was found.  The inside of the car though was severely damaged during the search.

Although the deadline for filing a civil forfeiture action passed over a year ago, the City will not return the vehicle to the Mother  Why?  She refuses to sign a form absolving the City of liability for damage to her car and won't pay $125 in storage fees to the owner of the impound lot.

The City has absolutely no authority to hold onto this woman's vehicle.  To do so is theft and conversion.  To try to extract a waiver and $125 in exchange for the release of a vehicle the City has no right to possess is reprehensible and the attorneys involved should be held in contempt for their conduct .  It is long past time for Indiana judges to crack down on underhanded civil forfeiture tactics.
Posted by Paul K. Ogden at 12:12 PM

I suppose a quiet title action and/or a replevin action in small claims court. Or perhaps a report of theft to the prosecutor's office would be in order. sounds like car theft to me.

This is definitely such abuse here. I am not sure what they are thinking here at all here. The city needs to pay for this car here. kitchen renovations Toronto